Who Would Want to Be the Next President?

Congress has passed an omnibus appropriations bill that jacks up spending across the board. Projections from the Committee for a Responsible Federal Budget show that the federal river of red ink is fast becoming a flood.


The chart shows CRFB’s “alternative” projection, which is the likely budget path if policymakers do not make major reforms. Deficits are expected to rise relentlessly, topping $1 trillion next year and hitting $2.4 trillion by 2028. That means spending $2.4 trillion more than available revenue that year.


The next president will come into office in early 2021, and the nation will be facing the most dangerous budget situation in peacetime history. If policies are not changed between now and then, he or she will be looking at 10‐​year deficits of $20 trillion or more. If you think Washington is a dysfunctional mess now with members at each other’s throats, I am guessing that today is a picnic compared to federal policymaking down the road. 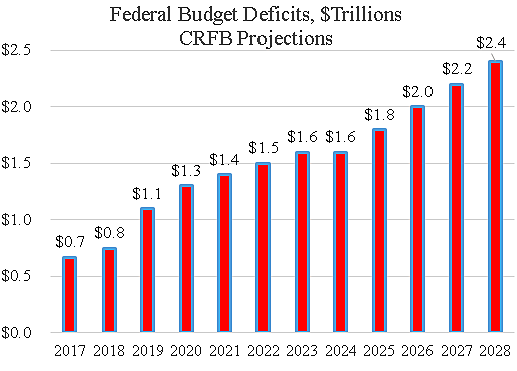