Where’s All the TAG Bank Lending?

The Senate is poised to vote on extending FDIC’s Transaction Account Guarantee (TAG) program, which offers government deposit insurance for bank accounts over $250,000. I’ve written elsewhere why this program is a big bank bailout that benefits mainly large account‐​holders.


I suspect the banks that are lobbying for an extension of TAG are offering all sorts of claims that not extending TAG would hurt the economy by reducing lending. Unfortunately for those banks there is little evidence that TAG resulted in any new net lending.


Before TAG was created, federal depositories (banks and thrifts), held about $8.2 trillion in total deposits. They also held about $7.6 trillion in net loans and leases. This makes for a ratio of about 93%. Today that ratio is just above 70% (see chart). While deposits increased during the crisis, and after the creation of TAG, by over $2 trillion, net loans and leases actually fell in $7.4 trillion. Whatever banks are doing with all these extra deposits, one thing they aren’t do is much new net lending. 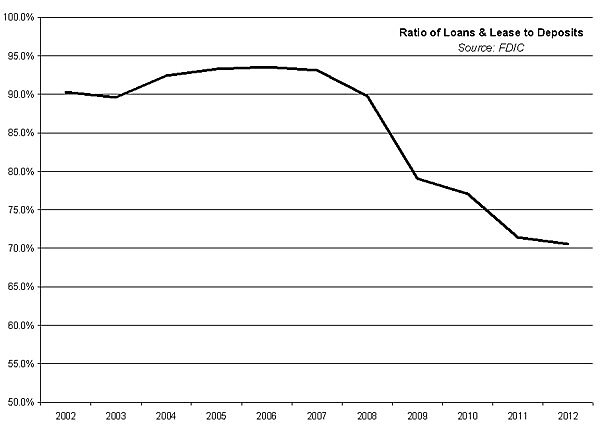 For the most part banks are using TAG deposits to either play in the derivatives market (think JP’s London Whale) or to purchase large amounts of Treasuries and Fannie/​Freddie securities. We would be far better off if this lending flowed to businesses rather than government. Banks have also used TAG to reduce their subordinated debt, further decreasing market discipline.


Much of TAG came at the expense of the money market mutual funds (MMMF). One of the reasons for Treasury’s MMMF guarantee program was actually to off‐​set the impact of TAG. Now that the (explicit) guarantee of MMMF is gone, we should end TAG. Shifting funds from MMMF to TAG has also resulted in significant disruptions to the commercial paper market, furthering harming business investment. We should start eliminating the various government guarantees of the banking system, starting with TAG.