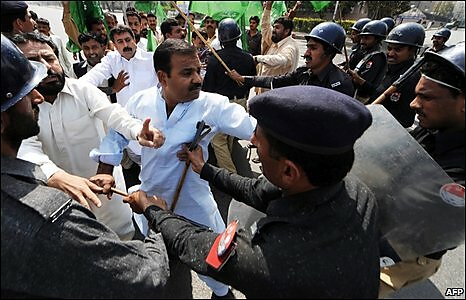 This weekend, protesters supporting Pakistani opposition leader Nawaz Sharif (PML-N) clashed with police in riot gear in downtown Lahore. The sight of lawyers being tear‐​gassed is shocking to many Americans. But what should be more shocking—yet extremely more complicated to work through as explained below—is America’s continued backing of Pakistan’s unpopular president, Asif Ali Zardari, who continues to obstruct his democratic opposition and (until recently) the reappointment of ousted Chief Justice Iftikar Chaudrhy.


It’s easy for people in the West to dismiss these demonstrations as the outgrowth of the country’s petty political infighting. But Americans must recognize that historically, U.S. policy and assistance has either enhanced the position of Pakistan’s military at the expense of its civilian leaders, or has helped domestic civilian leaders more popular within Washington than within their home country. Throughout the Cold War and up to the present day, these domestically unpopular figures devoted more government resources toward themselves, their own political parties, and their own bureaucratic expansion rather than toward economic and social reforms to modernize and better educate Pakistan’s population. Consequently, Pakistani citizens began to blame American aid and support for their own deteriorating situation.


But for long‐​term stability, U.S. policymakers must jettison the idea that a foreign leader’s denunciation of America means that leader poses a direct threat to U.S. interests. What America should want most is stability and continuity, particularly within Pakistan if we want to prevent the convergence of global terrorism and nuclear proliferation. Thus, in a perverse way, Sharif’s condemnation of the United States, coupled with his unwavering support for restoring judges sacked by Musharraf, has shored up his support within Pakistan, and his rise to power may actually bring solidity to the country.


The question of whether the military will step back in is much more complicated. Last August when the military backed away from politics, that move was based on political expediency (a desire to repair its tarnished image) rather than on political principle (a desire to restore the country’s democratic rights). If people in the military begin to feel that the country is slipping out of control they would attempt to retake power. There are, however, two main reasons why the military would not try to reassert its authority: 1) political pressure from Washington (the belief that with the military focused on governing, it would take its focus off combating the insurgency); and 2) pragmatism (after all, if Pakistanis are in an uproar over Sharif, imagine the protests that would ensue if army generals tried to impose martial law).


But when it comes to foreign policy, anything is possible, and Pakistan’s government has swung like a pendulum between military dictators and electoral democracies throughout its 61‐​year history. Because civilian leaders do not have a monopoly on government decision‐​making, U.S. policymakers must cultivate relations with both the civilians and the military, as civilians may be in power one day and the military in power the next.


Pakistan’s army is on standby ahead of today’s planned sit‐​in by lawyers in Islamabad, and authorities warn that such a protest would paralyze the government. The best U.S. Secretary of State Hillary Clinton can do is work with both Zardari and Sharif to arrive at a negotiated settlement to restoring judges and ending the political deadlock. But overall, Pakistan’s long‐​term success depends on the strength of its civilian institutions and the public’s repudiation of extremism. In this respect, America must be committed to strengthening cooperation not only with the Pakistani Government but with the Pakistani people.