What Is Syria’s Iranian Credit Line Worth?

Last week, the press was filled with reportage about Tehran throwing a lifeline – actually a credit line of $3.6 billion  – to the Syrian regime.

The announcement of this Iranian lifeline should have changed the economic expectations of Syrians in the throes of what has morphed into a bloody civil war. Indeed, if it materializes, the $3.6 billion credit line should allow Damascus to conserve its dwindling supply of foreign exchange. This development should have thrown a positive expectation shock into the market for the Syrian pound.

So, did economic expectations receive a positive boost from the announcement of Tehran’s lifeline? Let’s go back to May 27th. That’s when the tentative credit line agreement was announced. A mini event study shows that the initial agreement had no material impact on expectations, as objectively measured by the Syrian pound/U.S. dollar black-market exchange rate. Indeed, the SYP/USD exchange rate was unmoved by the tentative agreement (see the accompanying table). 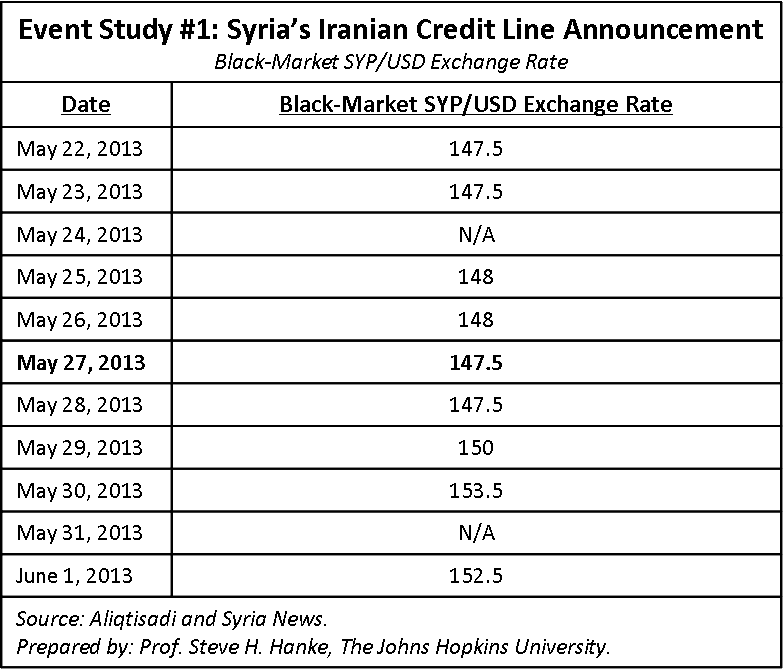 The next event in this credit line story occurred on July 30th, when it was announced that the May agreement had been finalized and signed on July 29th. Again, expectations and the SYP/USD exchange rate remained unmoved (see the accompanying table): 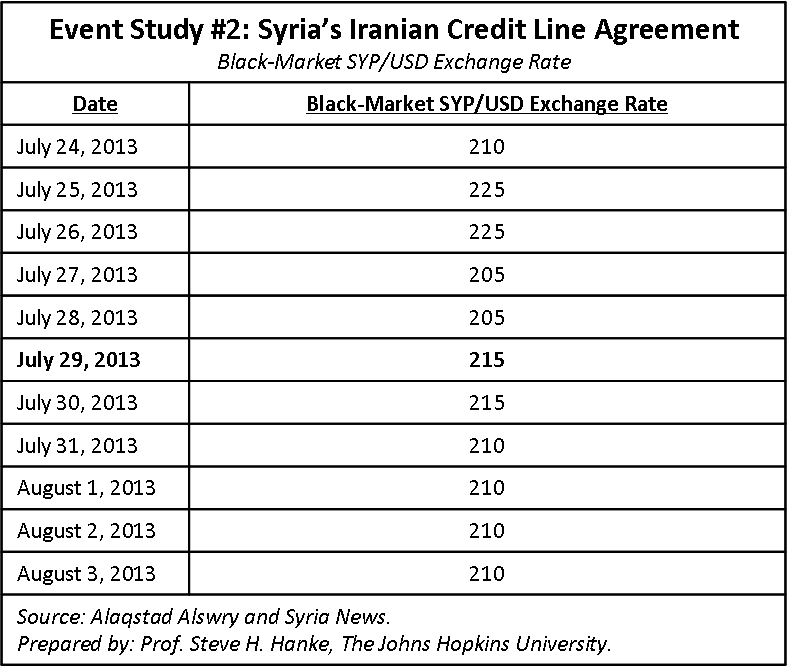 What, then, can we say about the Tehran-Damascus deal? Well, objective data – namely market prices – tell us that the widely-reported event had no material effect on Syrians' economic expectations. Accordingly, the implied inflation rate for Syria remained unmoved. Using these objective black-market exchange-rate data, I estimate that Syria is currently experiencing an annual inflation rate of 190.7%.

In short, Syrians viewed the deal as irrelevant. They think that either Iranians won’t deliver on the promised credit line, or that if they do, it will not change the situation on the ground.

I often tell my students to be mindful of the late Prof. Armen Alchian’s “95% rule”: Ninety-five percent of what you read that passes for finance and economics is either wrong or irrelevant. For the time being, it appears that Syria’s Iranian credit line falls under the latter category.

I have established a page to track current black-market exchange-rate and implied inflation data for the Syrian pound, as well as for troubled currencies in Iran, Argentina, North Korea, and Venezuela. For more, see: The Troubled Currencies Project.