What the Overstay Rate Tells Us about Border Security

There are two ways to become an illegal immigrant in the United States.  The first is to enter illegally, usually across the Southwest border.  Those folks are sometimes called EWIs, short for entered without inspection.  The second way to become an illegal immigrant is to enter legally and then lose legal status, often by overstaying a temporary visa.

Overstays as a Percent of all Illegal Entries 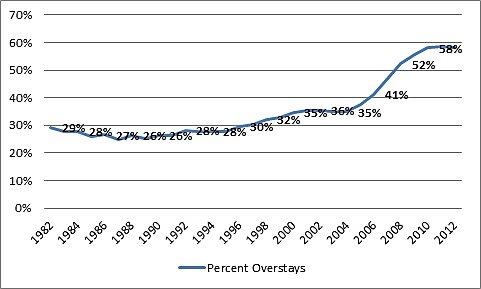 At an immigration hearing last week, several witnesses emphasized that continued illegal immigrant entries along the Southwest border and a rising percentage of overstays mean that America’s immigration system is insecure.  In contrast, the higher overstay rate is evidence of fewer illegal immigrants crossing the border as EWIs.

As evidence for that, I kept Warren and Kerwin’s estimates of the overstay population unchanged but held constant at 2000 levels the number of illegal immigrants entering without inspection.  In other words, I didn’t change the flows in the overstay population but just froze the number of illegal immigrants entering without inspection at the higher 2000 number.  Doing that lowers the 2012 overstay rate to 24 percent – less than half of the rate it actually was and lower than at any point during the entire 30 year period in their paper.

Warren and Kerwin admit that their overstay rate results are sensitive to their estimates of EWIs and how many overstays actually stay long enough to become illegal immigrants.  Small changes in those numbers can shift their findings dramatically.  However, the relationship between the number of CBP apprehensions and the overstay rate supports my simple point (Chart 2).  As the number of apprehensions fell because fewer immigrants attempted to enter the United States, overstays provided a greater percentage of new illegal immigrants. 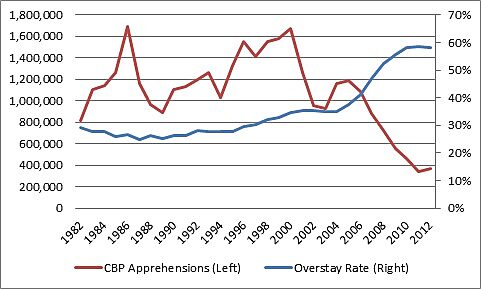 Sources: Warren and Kerwin and Customs and Border Protection.

The increasing contribution of overstays to the illegal immigrant population is a result of a relatively secure border rather than a worsening vulnerability that is itself worsening.