What Federal Spending to Cut?

The most dangerous domestic problem facing America’s federal government is the rapid growth of its budget deficit and national debt.

To avoid economic distress, the government either has to impose higher taxes or reduce future spending. Since raising taxes weakens incentives and further slows economic growth … the better approach is to slow government spending growth.

Defense spending and nondefense discretionary outlays can’t be reduced below the unprecedented and dangerously low shares of GDP that the CBO projects. Thus the only option is to throw the brakes on entitlements. In particular, the government needs to hold back the growth of Medicare, Medicaid and Social Security.

Here, I differ with Feldstein. We need a more expansive view of what can and should be cut.


The pie chart breaks down the $4.5 trillion federal budget for 2019 into major parts, and it identifies which parts should be cut. 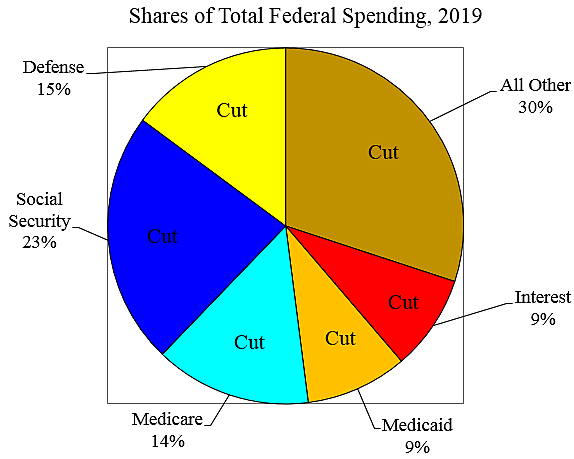 Here are some reform suggestions:

If the government is subsidizing everyone, then it is effectively subsidizing no one. We are shuffling trillions of dollars around and the largest net gainers are the high‐​paid middlemen and lobbyists in Washington.


Feldstein concludes: “Lawmakers don’t like to cut spending, but they have to do something. Otherwise the exploding national debt will be an increasing burden on our children, economic growth and our future standard of living.”


I agree with that, but it suggests that cuts are like taking unpleasant medicine to treat an illness. Instead, spending cuts should be viewed as a positive. They would shift resources from mismanaged and damaging federal programs to more productive private activities. Federal spending cuts are not a necessary evil needed to tackle deficits, but rather an opportunity to spur growth and expand freedom.