What Explains the Flow of Unlawful Immigration?

The flow of unauthorized immigrants to the United States has collapsed.  The apprehension of illegal immigrants by Customs and Border Protection (CBP), the best proxy measurement of the flow of such people, along the Southwest Border is way down (see below).

All Apprehensions on Southwest Border 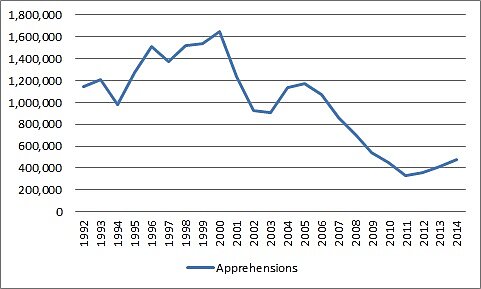 What explains this?  A number of factors are at play.  Economic conditions in the United States, economic or other conditions in other countries, and immigration enforcement all explain part of the decrease in unauthorized immigration over the years.

Mark Krikorian of the Center for Immigration Studies (CIS) gives most of the credit to beefed up immigration enforcement along the border.  Krikorian seconds a quote by Marc Rosenblum, deputy director of the Migration Policy Institute, who says:

Every month or quarter that the economy continues to improve and unauthorized immigration doesn’t pick up supports the theory that border security is a bigger factor, and it’s less about the economy and we have moved into a new era.

But if immigration enforcement is the main reason why unauthorized immigration collapsed, why are the numbers of unlawful immigrants from countries Other than Mexico (OTMs) increasing?  CBP apprehensions don’t discriminate based on country of origin because they can’t tell where the immigrants are from until they’re apprehended. 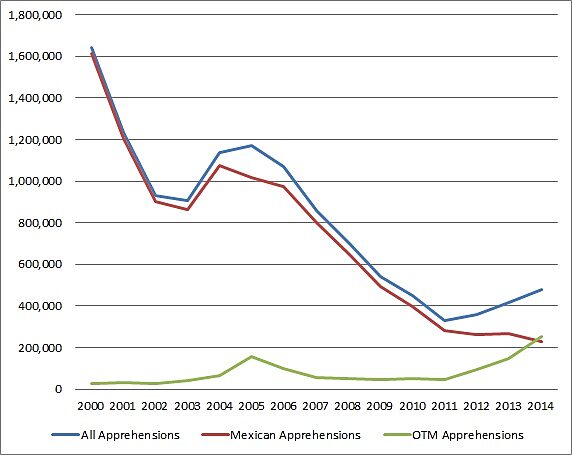 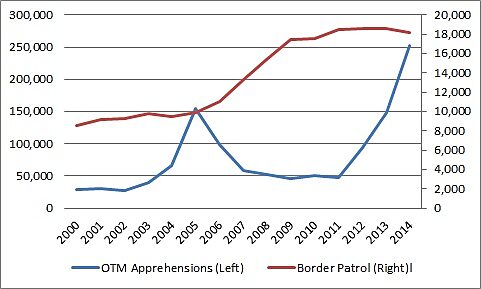 The decrease in unlawful immigration is due entirely to the fall off in Mexicans who were 98 percent of all apprehended illegal immigrants in 2000 but just 47 percent in 2014.  From 2000 to 2014, the correlation between apprehensions of Mexicans and the number of border patrol agents is very negative (-.93 ), supporting Krikorian’s theory that enhanced border enforcement is deterring unlawful Mexicans.

The economic indicators aren’t irrelevant though.  Mexican per capita GDP (PPP$) and apprehensions of Mexicans have a correlation of -.89, which means that as Mexican income goes up apprehensions of Mexicans goes down.  The richer Mexicans are in Mexico, fewer of them emigrate illegally to the United States.  The correlation between U.S. unemployment and Mexican unlawful immigration is less negative (-.81), showing that when unemployment is high fewer unlawful Mexican immigrants come.  The relationship between housing starts and unlawful Mexican immigration is also high (.79).

Mexicans became richer at the same time that U.S. border enforcement increased.  Maybe throwing billions of dollars of taxpayer resources at the border or changing tactics actually worked or maybe Mexicans became rich enough that they didn’t have to come or maybe it was a combination of both of those factors and others that haven’t been considered.  Regardless, enforcement is not the only variable that has changed here.  OTMs add another wrinkle.

The number of border patrol agents and OTMs is positively correlated (0.37).  U.S. unemployment rates and housing starts have no relationship to OTM apprehensions.  OTMs are mostly Central Americans, virtually all from nations that are poorer and more violent than either the United States or Mexico.  U.S. immigration enforcement is not deterring them, what is pulling them in and pushing them out of their home countries?

Economic explanations of the flow of unlawful immigrants depend upon more than just the unemployment rate in the United States.  The economic conditions on the countries of origin must also be considered before we conclude that immigration enforcement deserves the credit and blame for stopping unlawful immigration.