Evidence comes from a study by Pirmin Fessler and Martin Schurz for the European Central Bank. The authors explore the relationship between government social spending and wealth distribution in 13 European countries using a survey database of 62,000 households. The database contains household balance sheet information.

Regression analyses by the authors confirm that “the degree of welfare state spending across countries is negatively correlated with household net wealth. These findings suggest that social services provided by the state are substitutes for private wealth accumulation and partly explain observed differences in levels of household net wealth across European countries.”

The authors found that the “measured inequality of wealth is higher in countries with a relatively more developed welfare state.” Why is this the case?

The relationship can be seen in this figure, which is their plot of social spending compared to the wealth of households at the 25th percentile (from the bottom) of each nation’s wealth distribution. 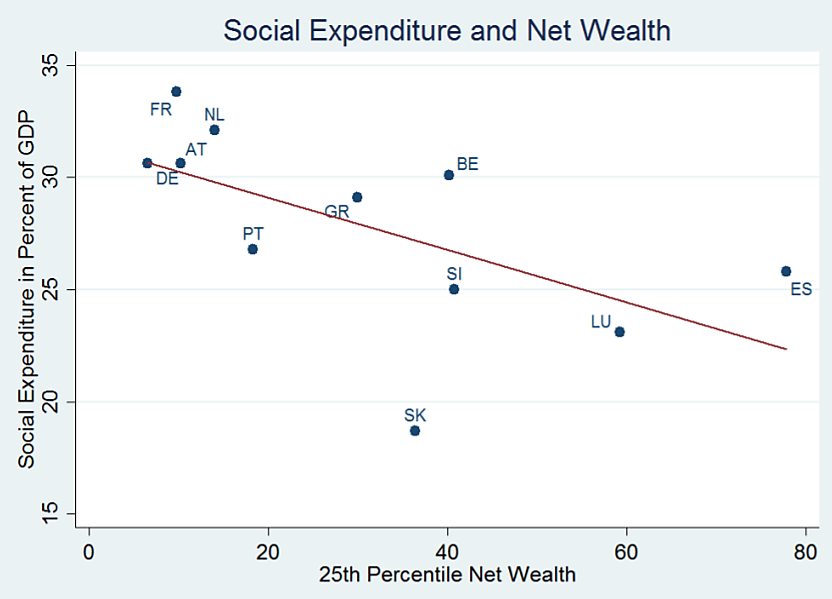 The authors note that their results are in line with the displacement, or crowding out, effects found in other statistical studies, such as economist Martin Feldstein’s work showing that Social Security substantially displaces private saving for retirement in the United States.

Data from Credit Suisse confirm that some nations with large welfare states have high wealth inequality. The bank points to Denmark, Norway, and Sweden:

strong social security programs—good public pensions, free higher education or generous student loans, unemployment and health insurance—can greatly reduce the need for personal financial assets, as Domeij and Klein (2002) found for public pensions in Sweden. Public housing programs can do the same for real assets. This is one explanation for the high level of wealth inequality we identify in Denmark, Norway and Sweden: the top groups continue to accumulate for business and investment purposes, while the middle and lower classes have a less pressing need for personal saving than in many other countries.

The bottom line for America is that expanding programs such as Social Security and Medicare will increase wealth inequality—the opposite effect Warren and Sanders may hope for. A better approach would be to cut the size of government and transition the nation to a leaner array of social programs based on personal savings accounts.