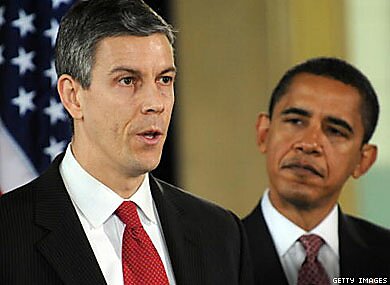 According to The Washington Post, the study found that "students who used the vouchers received reading scores that placed them nearly four months ahead of peers who remained in public school." In a statement, education secretary Arne Duncan said that the Obama administration "does not want to pull participating students out of the program but does not support its continuation."

Why then did the Obama administration "let Congress slash the jugular of DC's school voucher program despite almost certainly having an evaluation in hand showing that students in the program did better than those who tried to get vouchers and failed?"

The answer, says Cato scholar Neal McCluskey, lies in special interests and an unwillingness to embrace change after decades of maintaining the status quo:

Susan L. Aud and Leon Michos found the program saved the city nearly $8 million in education costs in a 2006 Cato study that examined the fiscal impact of the voucher program.

To learn more about the positive effect of school choice on poor communities around the world, join the Cato Institute on April 15 to discuss James Tooley's new book, The Beautiful Tree: A Personal Journey Into How the World's Poorest People Are Educating Themselves.

The New York Times reports, "President Obama plans to begin addressing the country's immigration system this year, including looking for a path for illegal immigrants to become legal, a senior administration official said on Wednesday."

In the immigration chapter of the Cato Handbook for Policymakers, Cato trade analyst Daniel T. Griswold offered suggestions on immigration policy, which include:

In a 2002 Cato Policy Analysis, Griswold made the case for allowing Mexican laborers into the United States to work.

For more on the argument for open borders, watch Jason L. Riley of The Wall Street Journal editorial board speak about his book, Let Them In: The Case for Open Borders.

In Case You Couldn't Join Us
Cato hosted a number of fascinating guests recently to speak about new books, reports and projects.