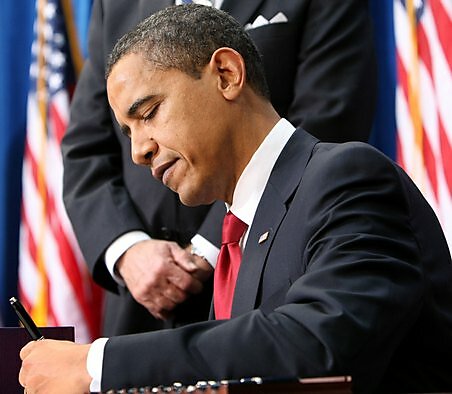 With a Stroke of a Pen, Future Generations a Trillion More in the Red

Now that President Obama's $787 billion spending measure has become law, will the plan work? Senior Fellow Richard Rahn takes a look back to see if history can offer guidance on whether this massive intervention of federal money will pull us out of the recession, or make things worse.

When President Obama signed the bill this week, many of the 1996 welfare reform provisions were chipped away, says Cato Senior Fellow Michael D. Tanner. In an op-ed for The New York Post, and in a Cato daily podcast, Tanner explains how parts of the new law actually offer states incentives to add people to their welfare rolls.

Both Presidents Obama and Bush have used fear-mongering rhetoric to radically expand the size of government. But wasn't it Naomi Klein, who asserted in her book The Shock Doctrine:The Rise of Disaster Capitalism, that free-market advocates are the ones spending their careers waiting for a crisis that could be used as a springboard for implementing free-market ideas? In an article for The Guardian Online, Cato Executive Vice President David Boaz points out that Klein has it backward: When crisis strikes, government usually gets larger, not smaller.

We had a financial crisis and what happened? Did the incumbent Republican administration say, now's our chance to implement Milton Friedman's program and privatize and deregulate? No, they did what governments always do: they expanded their own powers at the expense of civil society, and so in that sense, Obama's just doing the same thing that Bush did. We could call this the Bush-Obama era.

Time Magazine reports, "Afghanistan became President Obama's war on Tuesday, when he ordered two more U.S. combat brigades into the fight. He will send 17,000 combat troops to join the 36,000-strong U.S. force already in the theater. The fact that the units now ordered to Afghanistan had originally been slated for Iraq underscores the new Administration's shift in priorities."

Blogging the day after the president's announcement, Benjamin H. Friedman, research fellow in Defense and Homeland Security Studies, comments on the country's new approach toward Afghanistan:

A stable Afghanistan is neither necessary to US security nor obviously possible at reasonable cost, as I have periodically written. It is not evident that Al Qaeda types would again find haven in Afghanistan should we go. But assuming that they would, there remains an alternative to trying to overcome Afghanistan's anarchic history. We could attack only the remaining jihadists, their allies, and insurgents who will not settle for local power. That would require only a small U.S. ground presence, airstrikes and local allies.

The Bush Administration may no longer be in power, but don't expect defense spending to drop substantially, says Friedman. In an article for World Politics Review, Friedman discusses the future of foreign policy under the new administration and why it's unlikely Obama will rein in spending.

After receiving billions of dollars from President Bush to rescue their companies, U.S. automakers are asking for billions more from the new administration. CNN.com reports that when the final dollar is received, the auto bailout tab could top $130 billion.

Daniel J. Ikenson, Cato's associate director for trade policy studies, says this was to be expected:

Bush's decision to defy Congress and provide "loans" to GM ($9.4 billion) and Chrysler ($4 billion) back in December wasn't even intended as a cure all. It was designed to buy time for the producers to come up with detailed viability plans for their next bite at the apple. And as expected, central to both viability plans, which were unveiled yesterday, is more taxpayer money. At the moment, a combined $22 billion is being requested, which would bring the total doled out to just under $40 billion.

Not to say we told you so, but during the auto bailout debate, Ikenson warned time and time again about the pitfalls of bailing out these failing companies.