The Wealthy Are Not All the Same: A Recent Study Finds Key Differences

Inequality and the “one percent” have generated an inordinate amount of media coverage recently, despite the fact that these topics barely register when people are asked to name the country’s most important problem. The rhetoric often portrays the wealthy as a homogenous group that inherited its wealth, and those that do work operate almost exclusively in the financial sector. A recent study published in Intelligence this year that was highlighted by Tyler Cowen delved into the characteristics of wealthy individuals. The findings run contrary to the commonly held perception that this is a stagnant, homogeneous group. There is a significant amount of diversity when it comes to which industries these people work in, and a much higher share of the wealthy Americans in this sample are self-made compared to some European peers.

In their study, David Lincoln from Wealth-X and Jonathan Wai from Duke University use the Wealth-X database to analyze a sample of more than 18,000 ultra high net worth (UHNW) people, which they define as having a net worth greater than $30 million. Their findings help us get beyond the rhetoric to see how the wealthy got to that position.

In fact, only 12.6 of the American individuals analyzed derived most of their wealth from inheritance, a lower share than any European country in the sample besides Finland (9.1 percent, but with a much higher share with their primary source of wealth being a mix between inheritance and self-made) and the United Kingdom (12.5 percent).

Unlike the common portrayal, it is the European countries that has a more stagnant and stultified elite class, while the United States has one of the higher shares of self-made men and women in the study’s sample. 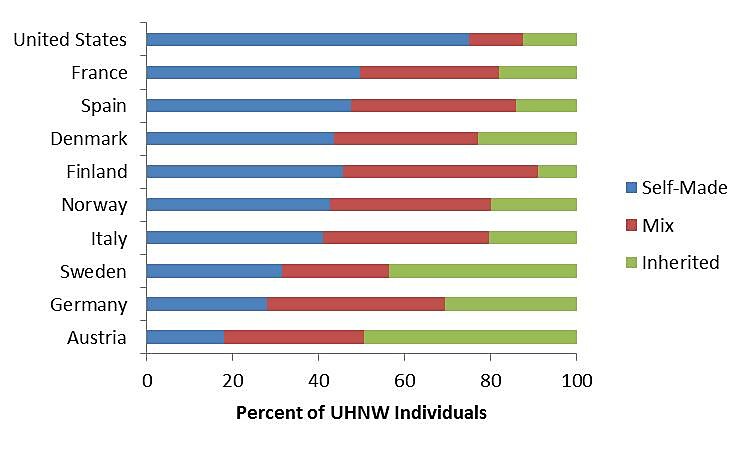 There is also a surprising amount of variation when it comes to the industries where UHNW people work. While the highest share is in finance and banking at just over 18 percent, a significant number of the people in the sample work in other industries like real estate, media, or IT services.

The composition of industries has changed over time and will continue to do so. This reflects another way that this group is ever-changing, especially in places like the United States, where there are more opportunities for founders, innovators, and entrepreneurs to reach the highest levels. 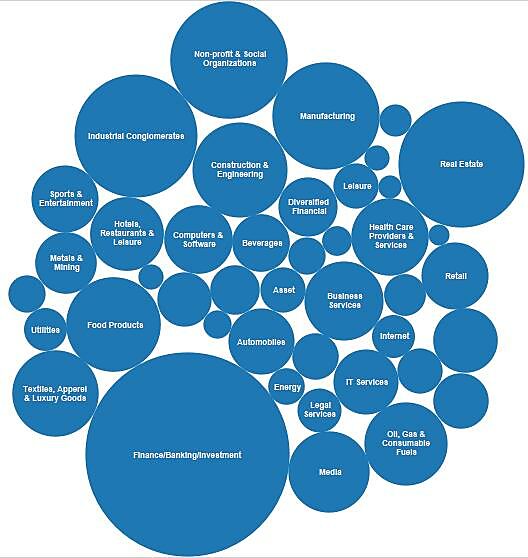 Note: Labels excluded for industries with smaller shares due to space constraints. A full list can be found in Appendix G of the paper.

The wealthy people in this sample are not a homogenous group, and there are significant variations when it comes to family composition, political affiliation, generosity, and religion, among other things. UHNW people take a number of different paths to attain their wealth, such as working in media, in manufacturing, or in tech companies. Compared to some of the European countries that are typically viewed as more egalitarian, more UHNW Americans acquired wealth that was self-made. In short, the issue is not as simple as the rhetoric often implies.

My colleague Michael Tanner recently released a paper looking at more of the common myths that surround the discussion of inequality, which can be found here.