Presidential candidates Bernie Sanders and Elizabeth Warren have each proposed an annual wealth tax on the richest Americans. There are so many flaws with such a tax that it probably would not pass Congress. If it did pass, it would likely be repealed soon after as the damage became obvious even to the politicians.

The number of European countries with annual wealth taxes has fallen from 12 in 1990 to just 3 today. The Europeans found that wealth taxes induced avoidance, evasion, and capital flight, as I discuss here. The taxes were also full of exemptions and raised relatively little revenue.

I suspect that a U.S. wealth tax would only raise about 0.2 percent of GDP, or about one‐​seventh of what Warren claims.

Warren says that her plan would tax “every dollar of net worth” above a $50 million exemption, and the estimate from her advisors assumes the tax base would be “comprehensive” with no exemptions. But any wealth tax that got through the congressional sausage machine would be riddled with exemptions.

Many assets would be exempted under a U.S. tax. The wealthy would buy those assets with borrowed money, and the net wealth tax base would shrink. Accountants would develop new avoidance and evasion methods, investment would fall, and revenue would melt away.

What would be the net effect? We can look at the actual experiences of European countries. The chart shows average revenues as a percent of GDP for the last five years of each country’s wealth tax and compares them to the revenues that Warren claims her tax would raise. 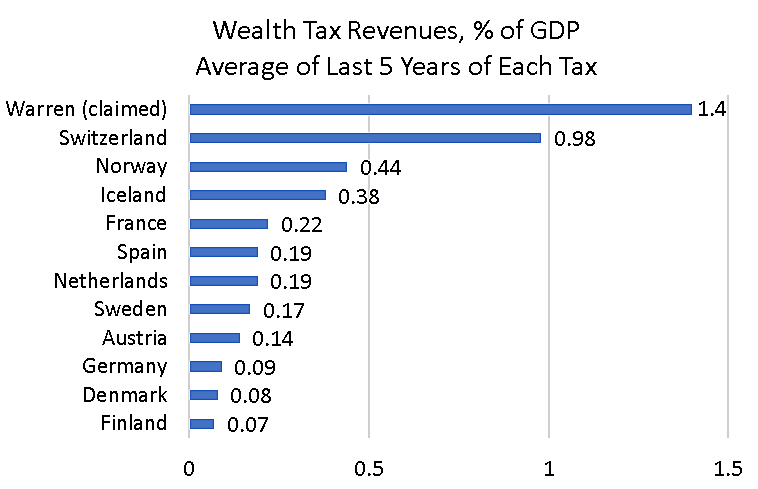 On average, Euro wealth taxes raised 0.27 percent of GDP in revenues, per OECD data. But Switzerland is an outlier. Its wealth tax has an exemption level in some cantons of just $80,000 or so. The Swiss wealth tax is a mass tax, not just a tax on the rich as Sanders and Warren envision. Without Switzerland, the Euro average in revenues was just 0.2 percent of GDP, which would be about $43 billion a year in the United States.

Furthermore, higher wealth tax rates may not raise more revenues because this tax would be stacked on top of existing capital income taxes and the tax base is responsive. A 2 percent wealth tax on an asset earning 4 percent would be like a 50 percent income tax—on top of the existing top federal income tax rate of 37 percent and state rates up to 13 percent. The wealthy are not going to sit around idly while foolish politicians steal their businesses and life’s earnings.

In sum, I doubt whether a U.S. wealth tax would raise more than the typical Euro wealth tax of 0.2 percent of GDP, or maybe $40 to $50 billion a year.

The problem with a wealth tax would be the economic damage, not the limited revenue potential. But exaggerated revenue claims are fueling a narrative that vast new spending could be funded by taxes on the rich. That narrative is false.

I describe why wealth taxes make no sense here.

An NTU tally of Warren’s proposed tax increases is here.