Germany is currently grappling with the ramifications of imposing a national minimum wage, and the lessons we can learn from their experience should deter calls for raising the minimum wage here.


Earlier this month, the German parliament’s lower house adopted a new national minimum wage of €8.50 ($11.61) an hour, beginning in 2015. Before this, there had been no national minimum wage in the country, with trade unions and employers negotiating wages by sector. Just as the Congressional Budget Office estimated that raising the minimum wage here could reduce employment by 500,000 workers by 2016, one of Germany’s most respected economic institutes warned that Germany could lose the equivalent of 340,000 full‐​time jobs. While there are some factors, such as a high proportion of apprenticeships, which could dilute the harmful effects of such a minimum wage in Germany, this adoption is a step backwards for the country that is often an economic leader in the EU.


Young workers are disproportionately affected by the minimum wage as they are more likely to have jobs that pay below the new statutory minimum. 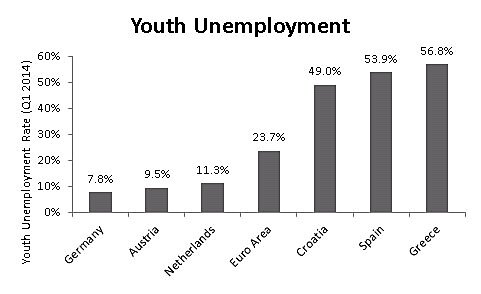 
This week the International Monetary Fund (IMF) released its latest report on the German economy, in which the authors raised numerous concerns about the imposition of a new national minimum wage (strange that they did not give voice to these concerns when advocating that the US raise its minimum wage in an earlier report this year).


As previous work by the Cato Institute has shown, the benefits of a minimum wage increase are poorly targeted to households in poverty. The IMF report notes that the “effects of the minimum wage on income redistribution toward the working poor may be limited, as the population of minimum wage earners and that of the working poor overlap only partially.”


The IMF authors also seem to recognize that the imposition of the minimum wage could have outsized adverse effects in some regions of Germany because a higher proportion of affected low wage workers live in East Germany (27 percent in the East compared to 15 percent in the West). While the variation between U.S. states is not as clear cut as the difference between East and West Germany, the employment outcome would be the same were a higher national minimum wage implemented here: in poorer states, where many workers would be affected by the increase, there would likely be significant job loss.


Local minimum wage increases, like the one in Seattle, are not as affected by this last mechanism, but they face the added danger of losing jobs to nearby jurisdictions that have not raised the minimum wage, as it is easier to outsource jobs to a neighboring city than it is to another state or country in many cases.


The new minimum wage in Germany will prove ineffective in improving the lot of low‐​income workers, and will likely lead to some job loss for the very people it is trying to help. Both countries would be better served exploring other means to improve outcomes for low‐​income workers. There are other, potentially more effective policy options to explore such as expanding apprenticeships (as Germany has already done) or introducing a lower provisional minimum wage for teens and the long‐​term employed. One thing is certain: in Germany, and the United States, a blunt policy instrument like the minimum wage is not the answer.