Trump’s call for a wall along the border reflects a common desire to control that supposedly lawless frontier. As far as unauthorized immigration goes, the border is coming under increasing control. 337,117 total unauthorized immigrants were apprehended by Border Patrol in 2015, the lowest number since 1971 (Chart 1). That number will likely rise this year but will still remain low. 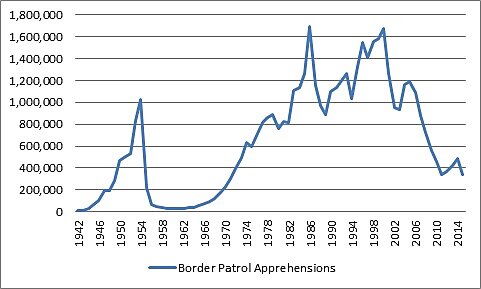 
Like the rest of government, Border Patrol has grown considerably over the decades despite the fall in apprehensions. In 2015 there were just over 20,000 Border Patrol agents, double the number in 2002 and 6.3 times as many as were employed in 1986 (Chart 2). 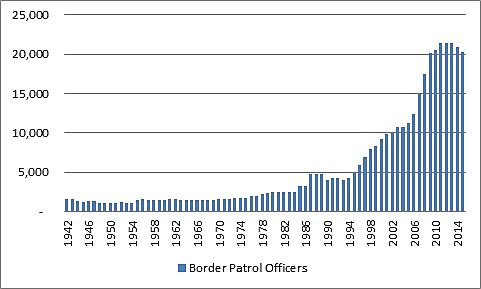 
The increase in the size of Border Patrol has likely decreased unauthorized immigration, although the precise amount is up for debate (read this excellent report for more information). On the opposite side, there is consistent evidence that border security does not affect the number of illegal entries but can dissuade migrants from leaving once they make it in. Although the effect of Border Patrol and security on illegal entries is not entirely clear, it is obvious that the average Border Patrol officer is apprehending fewer unauthorized immigrants than at any time in decades with the exception of 2011 (Chart 3). 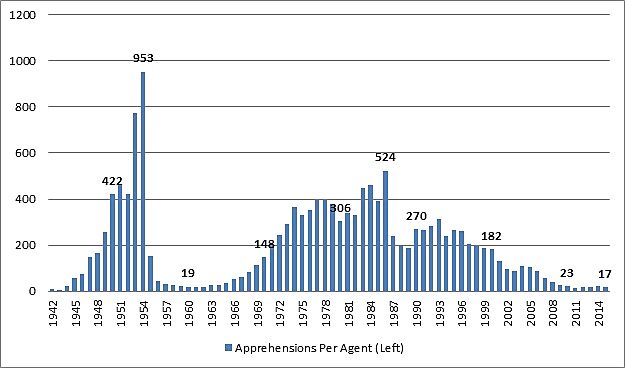 
There is already too much corruption in Customs and Border Protection, exacerbated by rapid expansions in the size of their force. New hiring binges will likely increase the struggles with corruption still more. Problems with agency corruption and a low period in unlawful immigration are superb arguments against expanding and perhaps to even shrink the Border Patrol back to a reasonable size.