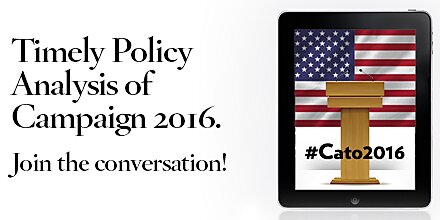 Tonight, starting at 6:00 p.m. EDT, CNN will host two nationally televised debates featuring candidates for the Republican nomination for the 2016 presidential elections. Though widely regarded as the “second” debate of this election season, those of you who have been following Cato coverage will recognize tonight’s broadcasts as the fourth and fifth debates of Campaign 2016.

Cato scholars will be on hand to live-tweet both debates, bringing insightful commentary and hard-hitting policy analysis to the discussion. Follow tonight’s live-tweeters and join the conversation on Twitter using #Cato2016.

Similar to the Fox debates, the split in candidates will be based on average scores from national poll results spanning a two-month period ending last Thursday, with candidates required to average at least 1 percent support in three polls to qualify.

Although CNN had originally intended only to include the top ten candidates in the later debate, an exception was made for Fiorina, whose performance in the first Fox debate helped her move into the top ten in polls conducted after that broadcast.

Candidates positions on the stage will be based on their overall rankings, with Trump—flanked by Carson and Bush—front and center for the primetime debate.

Former Virginia governor Jim Gilmore, who garnered 1 percent support in only one poll during the two-month window, did not meet the criteria for inclusion.