Politicians love infrastructure, but many local government projects seem awfully wasteful. We’ve all seen the questionable spending—the half dozen union guys standing around while one digs, the needless reconstruction of sidewalks, the dangerous bike‐​lane schemes on city streets, the empty city buses clogging traffic, and those digital announcement signs on highways with no useful information.

Local governments are flush with cash, and they waste it. Where I live in Virginia, a local government spent $1 million on one bus stop that should have cost $20,000.

WMATA originally budgeted $600,000 for each rack, but the price tag has soared to $1.9 million each.

The covered bike shelters will house 92 bikes, putting the price tag at more than $20,000 per bike. Future costs to finish the projects could raise that number even higher.

The projects were supposed to be completed in December of 2015 but remain unfinished in 2020.

… In January 2020 signs at the fenced‐​off construction site said the project would wrap up in late 2018. After ABC7 aired its story in January, the signs were removed.

Large cost escalations and delays are typical on government projects. Also typical: government agencies not being responsive to document requests and trying to blame others for failures, as ABC noted in its story.

People wonder why their local governments can’t seem to fill potholes, remove graffiti, maintain park equipment, and perform other basic functions. It’s because they are wasting money on Taj Mahal bike racks at $20,000 per bike. 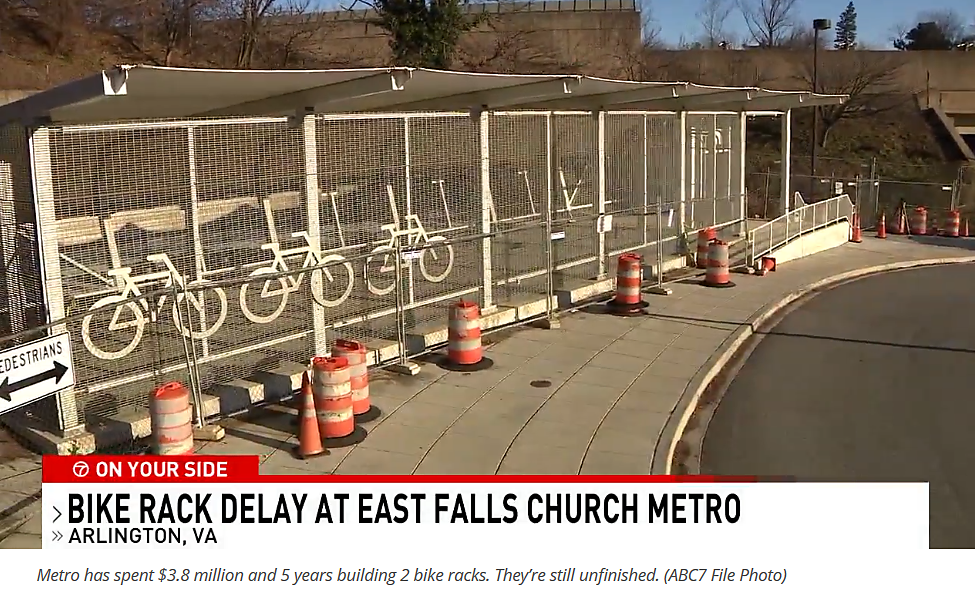