Warmest Year on Record in the U.S.


When the book closes on the year 2012, it will go down as the warmest year in the National Climatic Data Center’s (NCDC) history for the contiguous U.S.—a history that goes back to 1895.


And quite a warm year it was, topping the old record held by 1998 by about 1°F—a sizeable margin of victory. In the chart below (Figure 1), I have plotted the entire 118 year record, including the overall average (solid red line) and the 95% confidence range about that mean (+/- two times the detrended standard deviation; dotted red lines). I have also included the linear trend over the 118 years—a value of 0.13°F/decade. 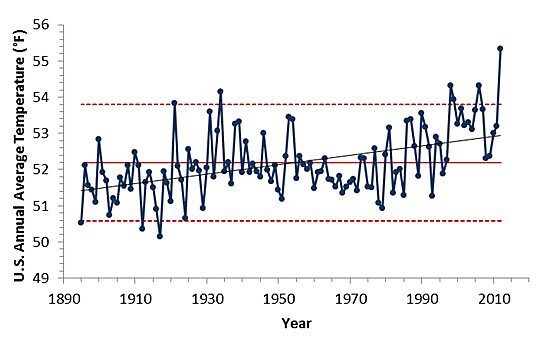 
Notice that the linear is not a great measure of what has been going on climatologically. There have been several multi‐​decadal periods when the average U.S. temperature has been generally above (1920s‐​1930s; mid‐​1990s‐​present) or below (1890s‐​1910s; 1960s‐​1970s) the linear trend term—an indication that larger‐​scale (quasi‐​cyclical?) variability plays a defining role in the character of the temperature history.


The role that anthropogenic “global warming” from the emissions of greenhouse gases from the combustion of fossil fuels plays is debatable—both in timing and magnitude. Almost certainly its influence is present and detectable in the U.S. annual average temperature record, but beyond that simple statement, not a whole lot more can be added with scientific certainty.


Shown below (Figure 2) is the relationship between mean annual global temperature departures from the long‐​term average and U.S. temperature anomalies. Statistically, the correspondence between the two is 35%, which means that there are a lot of other things influencing our temperature. 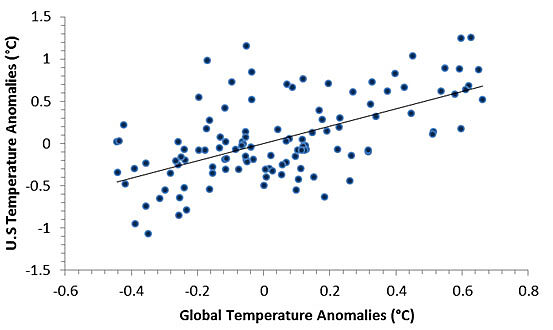 Further, as I have pointed out, there is little we could do to alter the climate influence of anthropogenic emissions even if we wanted to. So, probably the best thing to do when planning for the future is to be aware of the more or less capricious nature of our nation’s climate and keep in mind that humans are supplying an ever‐​growing warming pressure on top of that. The Boys Scouts got at least one thing right.