Economic freedom in the United States has plummeted to an all‐​time low. According to the Economic Freedom of the World: 2012 Annual Report, co‐​published today with the Fraser Institute, the United States’ ranking has dropped to 18th place after having ranked 3rd for decades up to the year 2000. The loss of freedom is a decade‐​long trend — the United States ranked 8th in 2005 — that has accelerated in recent years.


Virtually every U.S. indicator has seen a deterioration. Government spending and regulations have grown, the rule of law and protection of property rights have weakened, and foreign investment and non‐​tariff barriers have increased. Authors James Gwartney, Robert Lawson, and Josh Hall note some of the reasons for the decline, including the war on terror and the growth of crony capitalism.


As the graph below shows, the United States now has a lower economic freedom rating than it did in the 1970s.

The United States’ fall is alarming not only because it’s the most important economy in the world, long associated with market‐​liberal policies, but also because Economic freedom is strongly correlated with prosperity, higher growth, and improvements in the entire range of standard‐​of‐​living indicators, so a decline negatively affects those outcomes. The authors calculate, for example, that the loss of economic freedom will cut long‐​term U.S. growth by half to about 1.5 percent per year.


Another country that has seen a notable, steady drop in its economic freedom is Venezuela, now ranked last in the index. Other countries have been on an upward trend. Chile is now ranked 10th and China, while still largely unfree, continues to head in the right direction (see graph).


Below are the top ten countries in this year’s index. You can see a full listing here on page 10. 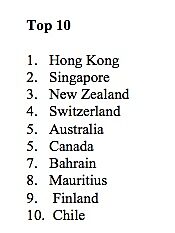 As my colleague Richard Rahn says in his column today, this year’s economic freedom report should be a wake up call to all Americans.