In his State of the Union address in January 2010, President Obama launched his National Export Initiative with the explicit goal of doubling U.S. exports by 2014. The Commerce Department’s monthly trade report released this morning confirms that U.S. exporters remain “on track” to meet that goal—to my pleasant surprise. (See the chart below.) 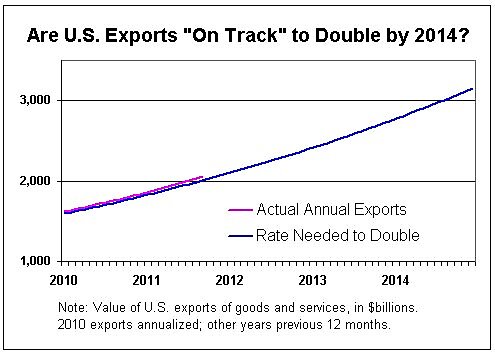 I went on record earlier this year with skepticism that the goal was realistic. And to my defense, we are still less than two years into the journey. Doubling exports in five years requires an annual growth rate of almost 15 percent, about double the average rate of export growth during the past 30 years. The current annualized growth of 16.3 percent since 2009 will be increasingly difficult to sustain as the rebound from the previous global recession wears off and storm clouds gather over the Eurozone.


We’ve long argued at the Herbert A. Stiefel Center for Trade Policy Studies that exports are only part of the trade equation. American producers and consumers benefit from competitively priced imports as well as foreign investment in the United States. But the NEI has served a useful political function of providing a framework for the administration to pursue trade liberalization.


In the name of promoting exports, the Obama administration managed to work with Republicans in Congress last month to pass trade agreements with South Korea, Colombia, and Panama. It has also resolved the cross‐​border trucking dispute with Mexico satisfactorily enough to remove Mexican sanctions against another $2.4 billion in U.S. exports. And it will soon be working with Congress to establish permanent normal trade relations with Russia, ushering the world’s 11th largest economy into the World Trade Organization and opening its market further to U.S. exports.


Even if U.S. exports fall short of doubling by 2014, expanding our freedom to trade is always a goal worth pursuing.