Democrats are making waves in tax policy by promising to reverse some of the 2017 Republican reforms. Rep. Alexandria Ocasio‐​Cortez called for raising the top federal individual income tax rate to 70 percent, which was the rate before Ronald Reagan came to office. I noted that the global economy has dramatically changed in recent decades, and such a high rate would be even more damaging today.


Democrats are also calling for a higher federal corporate tax rate, partly reversing the GOP’s cut from 35 percent to 21 percent. Democratic House Budget chair John Yarmuth, for example, is proposing to raise the rate to 28 percent. The problem, again, is that the global economy has changed and U.S. businesses face a more intense competitive climate than ever.


The chart shows the average federal‐​state corporate tax rate in the OECD industrial countries since 1980. The United States led a global wave of corporate tax rate cuts in the 1980s, but then federal policymakers sat on their hands for three decades as other countries continued cutting.


President Trump pushed hard and convinced Congress to reduce the federal corporate rate to 21 percent. But state taxes are piled on top of that for a combined U.S. federal‐​state rate of 27 percent. That is still higher than the 24 percent average of the OECD countries in 2018, according to KPMG. The global average rate per KPMG is also 24 percent.


On corporate taxes, America is still a high‐​rate country. 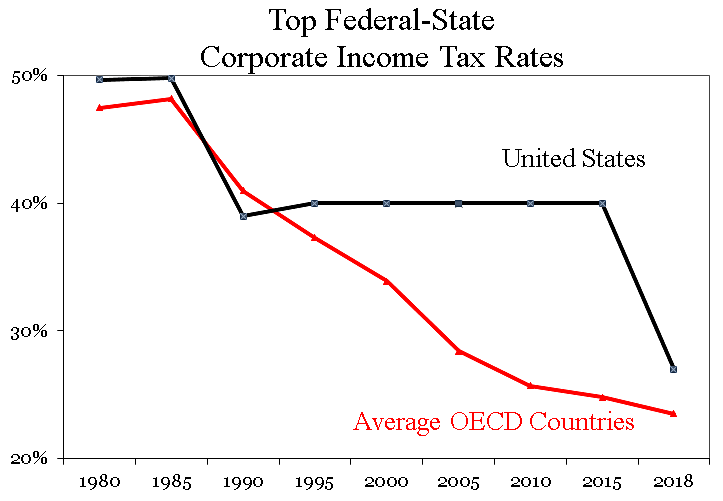 The data is sourced from OECD and KPMG.