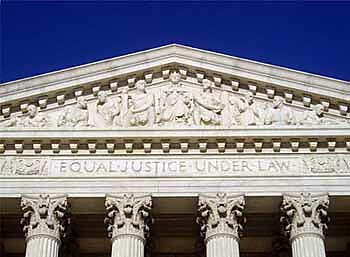 If this health care bill passes, we will need to change the wording on the Supreme Court facade. Out with “Equal Justice Under Law” and in with “Unequal Robbery Under Legislation.”


The legislative process is certainly ugly, but the health care bill would also impose pain and shower taxpayer‐​funded benefits in unequal ways in an ongoing manner. Senator Nelson, for example, apparently carved out special tax benefits for Nebraska insurance companies while effectively foisting Nebraska Medicaid costs on other states.


It’s one thing for members of Congress to support provisions that are good for their states as long as those things are also good for the nation. But today’s legislators are intent are screwing the other 49 states for selfish political advantage.


How else are we to read Nelson’s hesitation at supporting the health bill until he was apparently bought off? He seems to have been thinking, “I know this bill is bad for the broader nation, but that’s not important as long as they throw in special goodies for my state.”


Nelson and other politicians who want to use government to try and help their states should run for their state legislatures. Congress should be reserved for people willing to put aside their parochial interests and at least try to legislate with the general and common interests of 300 million Americans in mind.