As Congress negotiates an additional coronavirus stimulus bill, a new working paper from University of Chicago economists examines one element of the initial stimulus package – the extra $600 weekly benefit for unemployed workers through unemployment insurance (UI). The authors find that:

“The median replacement rate [of unemployment insurance under the provision of the CARES Act] is 134%. Two‐​thirds of UI eligible workers can receive benefits which exceed lost earnings and one‐​fifth can receive benefits at least double lost earnings. There is sizable variation in the effects of the CARES Act across occupations and states, with important distributional consequences.”

“…replacement rates over 100% create distributional issues and may hamper efficient labor reallocation both now, and especially during an eventual recovery. That is, expanded UI induces trade‐​offs between consumption smoothing and moral hazard.”

Under the CARES Act, the weekly $600 Federal Pandemic Unemployment Compensation benefit would expire at the end of July. The HEROES Act, however, which the House passed last week, would extend the $600 weekly benefit until January 2021. (The Senate is unlikely to adopt HEROES without substantial modifications.)

The main problem identified by the authors is the overall design of the UI policy – $600 per week, regardless of previous benefit level. This raises the replacement rate – the ratio of UI benefits to a worker’s average earnings – to over 100 percent for 68 percent of unemployed workers, meaning that nearly seven out of ten workers receive more in unemployment benefits than they did while employed.

There are also differences across employment sectors, seen in Figure 4. The implications are sobering. For example:

“unemployed janitors who worked at businesses which are closed can get UI benefits equal to 158% of their prior earnings, while janitors who continue to work at increased health risk in businesses deemed “essential” have no guarantees of any hazard pay or increased earning.” 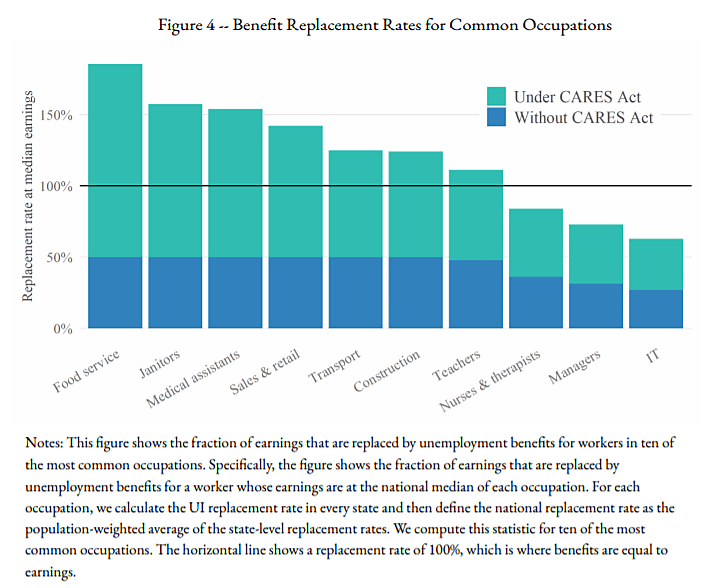 Frustratingly, the major problems caused by the current UI expansion could have been easily avoided if policymakers had made simple, common‐​sense decisions from the outset. The authors of the working paper illustrate that if, instead of a fixed weekly supplement, UI benefits had been boosted by adding a fixed percentage to replacement rates, only 7 percent of people receiving UI benefits would have seen a replacement rate of more than 100 percent while all UI recipients would have seen significant temporary boosts to their weekly benefit.

The UI policy in the CARES Act, and especially any extension until January 2021, is an excessive response to the pandemic. In addition to the distributional inequalities it creates, it reduces incentives to re‐​enter the labor market, negatively affecting an eventual economic recovery. Especially as businesses re‐​open, the economy will need a ready supply of workers, perhaps in industries different from where the unemployed originally worked.

Thus even if the CARES UI benefit made sense out of compassion for the unemployed, and even if it made sense to slow the economy as a means of limiting virus transmission, further extension will likely impede the economic recovery, which matters for a huge range of the population, unemployed or otherwise.