Venezuela has the dubious honor of registering the world’s highest inflation rate. According to my estimate, the annual implied inflation rate in Venezuela is 252%.

The only other country in which this rate is in triple digits is Ukraine, where the inflation rate is 111%. The only encouraging thing to say about Ukraine’s shocking figure is that it’s an improvement over my February 24th estimate of 272%—an estimate that attracted considerable attention because Matt O’Brien of the Washington Post understood my calculations and reported on them in the Post's “Wonk blog.”

As a bailout has started to take shape in Ukraine, the dreadful inflation picture has “improved.” Since February 24th, the hryvnia has strengthened on the black market from 33.78 per U.S. dollar to 26.1 per U.S. dollar. That’s almost a 30% appreciation (see the accompanying chart).

To calculate the inflation rate in Ukraine, all that is required is a rather straightforward application of a standard, time-tested economic theory (read: PPP). Using black-market exchange rate data that the Johns Hopkins-Cato Institute Troubled Currencies Project has collected over the past year, I estimate Ukraine’s current annual inflation rate to be 111%. 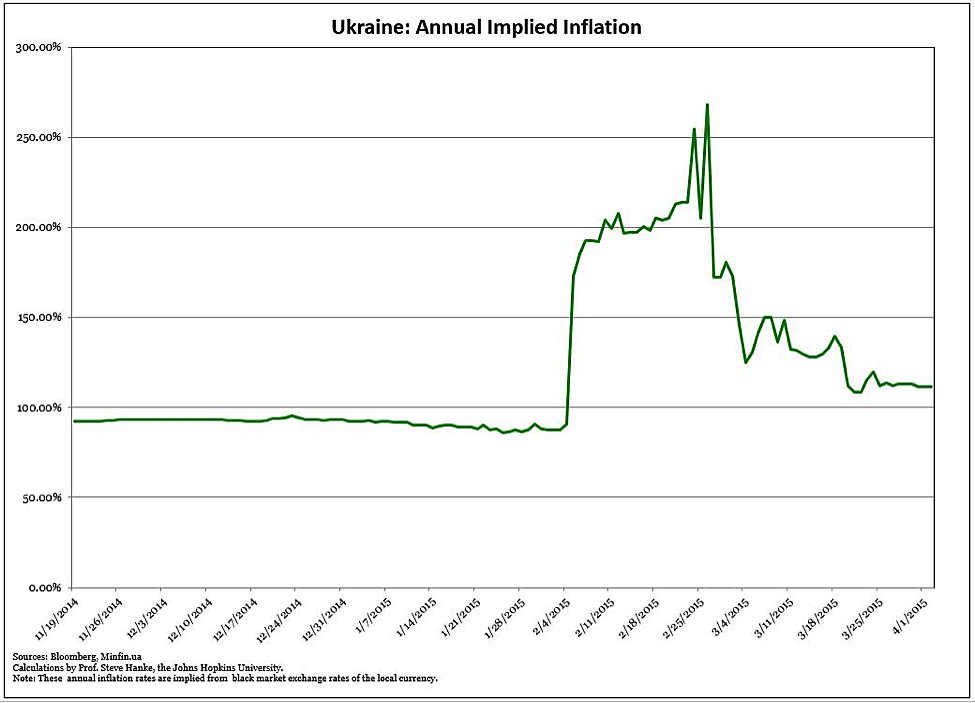 That rate is much higher than the "official" rate of 34.5%. Both the International Monetary Fund’s Extended Fund Facility for Ukraine (which has recently been approved) and Ukraine’s debt rescheduling negotiations (which have just commenced) are sitting on quicksand. Programs and negotiations based on a false premise are always treacherous affairs.