The Congressional Budget Office (CBO) recently released a fiscal impact score for the DREAM Act. It found that the DREAM Act would increase deficits by about $25.9 billion over the next decade. There are at least two problems with this CBO score and a solution that should make fiscal conservatives and DREAM Act supporters happy.


What is the Baseline?


The CBO’s black box fiscal estimates are frequently frustrating and this one is no exception. The biggest difficulty is telling what their baseline is. Their baseline could be that 700,000 DACA recipients continue to work legally, which is roughly the current situation but will continue to decline rapidly over the next few years as DACA disintegrates. The baseline could also assume zero government costs incurred while identifying and deporting immigrants who would otherwise have been legalized, an unrealistic assumption given that this administration is building up an internal deportation apparatus.


The American Action Forum (AAF) has estimated the federal government’s cost of deportation and indirect costs on GDP. The AAF findings suggest that removing DACA recipients and DREAMers over the next decade will increase government expenditures by $70 billion to $103 billion and lower GDP growth by about $260 billion. Both of those swamp and fiscal effects from the DREAM Act. If the AAF estimates are the baseline, the DREAM Act would actually save hundreds of billions of dollars over the next decade.


It is difficult to estimate what immigration enforcement will be like over the next decade but at least some of those large costs should be included as part of the baseline in any CBO fiscal cost analysis. The choice of baseline matters in whether the DREAM Act will be scored as fiscally positive, negative, or neutral.


The CBO versus the National Academy of Sciences


The findings of the CBO report are inconsistent with the National Academy of Sciences (NAS) fiscal cost projection for first‐​generation immigrants. The age and education of the immigrants are the two biggest factors that influence their net fiscal impact. The greater the education and younger the age at arrivals (with some caveats), the more fiscally positive the immigration is. In contrast, the less educated and older the age at arrival (same caveats), the less fiscally positive the immigrants is.


Applying the age and education profiles of DACA recipients to NAS findings by age and education in table 8–21 reveals startlingly different results from that of the CBO (Figure 1). Figure 1 shows the average net fiscal impact by DREAMers by year after legalization. Just counting the 700,000 DACA recipients should produce a fiscally positive result over the next decade of about $1.6 billion using the NAS methods. Expanding this to the roughly 2 million or so eligible DREAMers, assuming they have about the same education and age profiles, should produce about $4.6 billion in net positive tax revenues over the next decade. 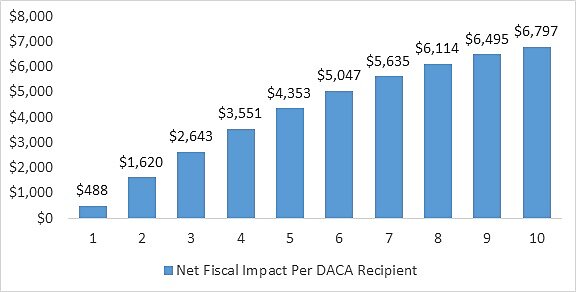 
This result comes from the age profile of DACA recipients and DREAMers, not from assuming that they will be highly educated. For the CBO to find that legalization will turn a $1.6 to $4.6 billion dollar surplus into a $25.9 billion deficit requires an enormous increase in benefit usage or a tremendous drop in taxable income or both at exactly the age when benefit receipts drop and taxable income rises for immigrants (Figure 2).


Figure 2: Taxes minus Benefits for Immigrants, by Age 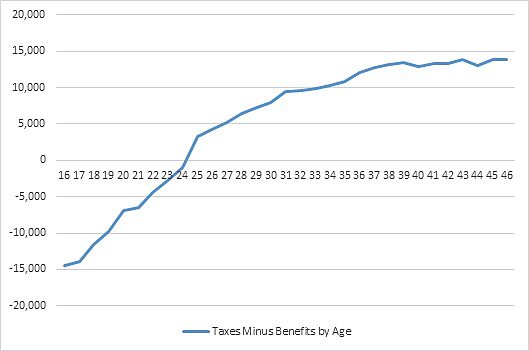 
Either the NAS is tremendously wrong in its widely praised fiscal cost analysis or the CBO made unrealistic projections and assumptions, perhaps having to do with a possible uptick in family‐​sponsored immigration after the DREAM Act. Regardless, one cannot praise the NAS findings and believe the CBO’s.


Even if you assume that the CBO’s findings are closer to reality than those of the NAS’, there is an easy solution that Republicans should leap for: welfare reform. As Cato scholars have written about in detail, it is easy, popular, and fiscally prudent to limit non‐​citizen access to means‐​tested welfare benefits. As part of a DREAM Act, Congress could include stricter welfare rules denying all non‐​citizens access to means‐​tested welfare, tax credits, and health insurance subsidies. Congress could then create a special green card for DACA recipients and DREAMers, call it the DLPR, which they cannot use to naturalize for 10 years. In such a case, they work legally and pay taxes without access to benefits for a decade when they will then have a choice. Permanently protecting a large population from deportation while also making this fiscal cost argument moot is a good deal and should be taken regardless of CBO findings.