Americans “don’t make anything anymore,” said Donald Trump on Fox on Sunday with Chris Wallace, lamenting what he sees as the death of U.S. manufacturing. “I just ordered 4,000 television sets. You know where they come from? South Korea … I don’t think anybody makes television sets in the United States anymore.” Actually, America still makes televisions. More importantly, Trump’s insinuation that trade has destroyed U.S. manufacturing is fundamentally mistaken.


The truth is that U.S. manufacturing is thriving, although the industry employs fewer people, mainly because of automation—not trade. Would Trump undo technological progress and massive savings to bring back manufacturing jobs? 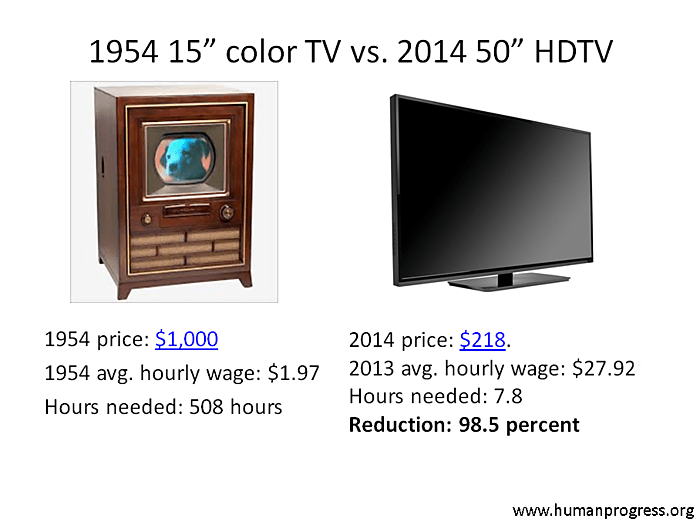 The rumors of American manufacturing’s death have been greatly exaggerated. Sales revenues and output are rising. In 2014, value‐​added by the industry set a new record. While it’s true that manufacturing is a smaller share of the U.S. economy than it once was, that’s not because it isn’t growing—other sectors of the economy are simply growing faster.


The reason that so many goods found in a U.S. convenience store say, “Made in China,” is because U.S. manufacturing has shifted towards high value‐​added products like aerospace equipment, not because the U.S. has stopped “making things.” 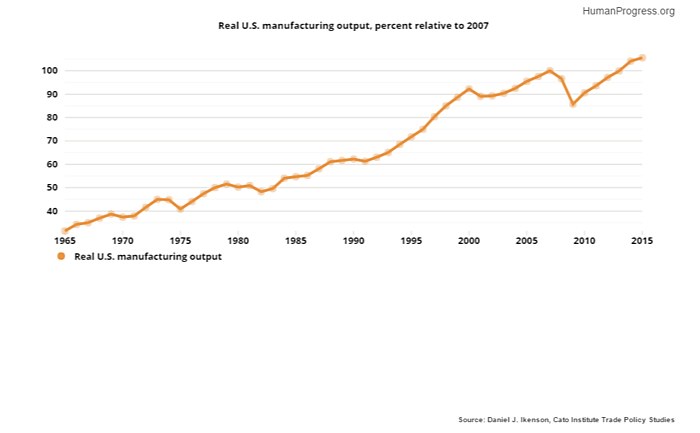 Despite growing revenues and output, manufacturing employs fewer Americans than it once did. Technological advancement has led to gains in efficiency, and it is primarily automation, not trade, that has reduced demand for workers in manufacturing.


In fact, the U.S. manufacturing industry added jobs in the years immediately after the North American Free Trade Agreement was passed. Trade restrictions sometimes even inflict harm on domestic manufacturing. Tariffs on manufacturing inputs (e.g., hot‐​rolled steel) may protect U.S. workers making that specific product, but harm all the U.S. manufacturers who need those inputs to create other products (e.g., airplane parts) further down the production line. On the whole, trade enriches us. 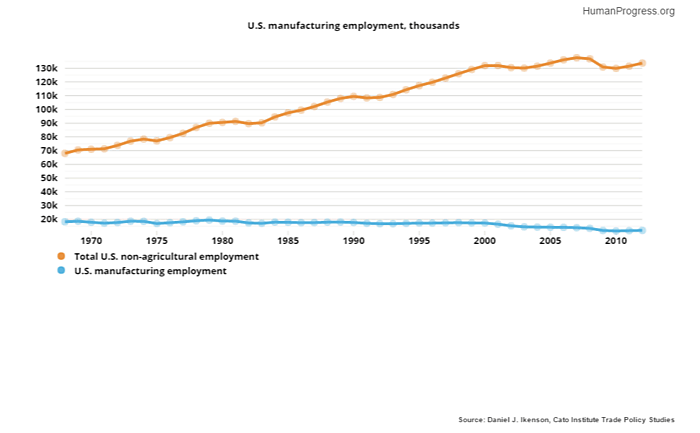 While manufacturing employs fewer Americans than it did in Donald Trump’s youth, total U.S. employment has risen, as more Americans find work in other sectors of the economy. If Trump would give up gains in efficiency solely to boost employment in manufacturing, then he may want to consider this famous piece of advice attributed to Milton Friedman:

Milton recalled traveling to an Asian country in the 1960s and visiting a worksite where a new canal was being built. He was shocked to see that, instead of modern tractors and earth movers, the workers had shovels. He asked why there were so few machines. The government bureaucrat explained: “You don’t understand. This is a jobs program.” To which Milton replied: “Oh, I thought you were trying to build a canal. If it’s jobs you want, then you should give these workers spoons, not shovels.”

Does the Donald want America to build things, or does he want us digging with spoons?