President Trump came into office promising spending cuts and debt reduction, but so far he has delivered the opposite. His new budget promises cuts, but his record over the first four years is fairly spendthrift compared to past presidents.

The chart shows the total real (inflation‐​adjusted) spending increase over the first four years of each president. For Trump, I’ve assumed he gets the 2021 spending he proposes in his new budget. Thus, Trump’s spending increases are fiscal 2021 divided by fiscal 2017. 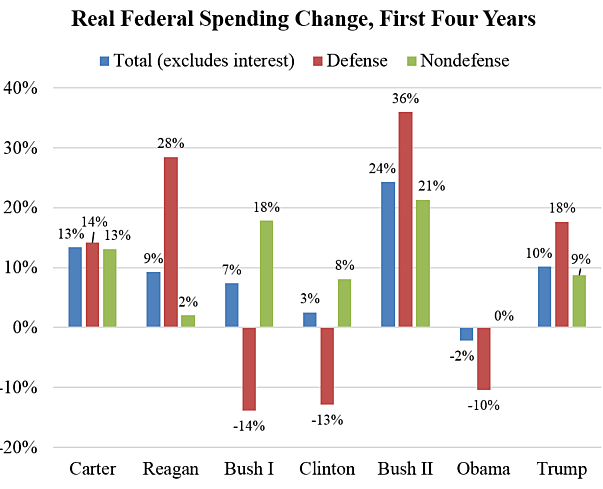 The data comes from Table 6.1 here with one exception. I’ve adjusted spending for 2009 to remove TARP and the stimulus bill. That affects the calculations for Bush II and Obama, as I explain here.

The nondefense figures include discretionary and entitlement spending.

Here’s a quick take on the presidential records:

Carter and Bush II were big spenders across the board.

Bush I and Clinton benefited from defense spending falling after the Cold War. Bush I was a big spender on nondefense programs.

Obama pushed to pass $800 billion in stimulus spending his first year. Luckily, most of it was temporary and petered out in subsequent years. Thus, Obama’s nondefense looks frugal in the chart, but it mainly excludes his misguided stimulus spending. Also, the GOP Congress pushed to restrain spending after the 2010 election.

Obama’s defense spending fell as Iraq and Afghanistan started to wind down.

Trump has been a big spender across the board. His new budget promises cuts, but it remains to be seen whether he really means it or whether his budget is just an accounting exercise.