Trump Should Do Homework on Entitlements


Trump said, “You can’t get rid of Medicare. It’d be a horrible thing to get rid of. It actually works. You get rid of the fraud, waste and abuse — it works.”


Mr. Trump seems sure that it’s easy to fix Washington with tough talk and a little elbow grease. I admire his confidence, but he needs to do his homework on the entitlement programs.


Because the Obama administration has buried its head in the sand on the entitlement crisis, the next administration will face very ugly budget projections when it comes into office in 2017. The chart below shows the explosive CBO projections for the three largest entitlements. Over the next two presidential terms, spending is expected to grow 62 percent on Social Security, 73 percent on Medicare, and 45 percent on Medicaid.


Without needed cuts, Social Security will become a $1 trillion program in 2018, and Medicare will top $1 trillion by 2022. These programs are only “working” to put the next generation of taxpayers into the poor house.


As for “fraud, waste and abuse” in the health programs, the cause is same as the cause of the explosive growth. That is, the open‐​ended and top‐​down structure of the programs that funnels vast funds to doctors and hospitals. The way to slow the rapid growth and cut the waste is to move to a system of consumer‐​driven health care based on individual vouchers, savings, and competition. 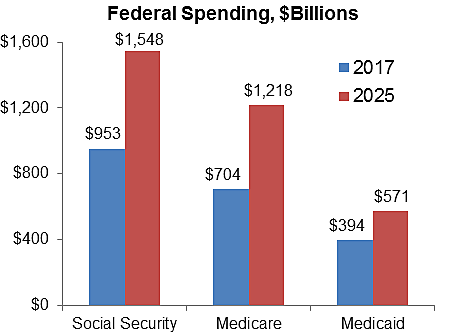