I’d have figured that the category of “Trump supporters who are aware of the Atlantic Monthly” would be an empty set, but it turns out there are at least 30 of them. Last week, in an open letter to Trump fans, the Atlantic’s Conor Friedersdorf asked “why him?”, and yesterday, he published the results: “What Do Donald Trump Voters Actually Want?”


The funniest responses tend toward the nihilistic: “I really am at the point of letting the whole thing burn down and explode…. Like the joker from The Dark Knight, I just want to see the world burn”; or, “I just want to watch the chaos unfold …. I’m a young guy who is immature, a bit antisocial, and with no plans for kids or a wife ever. At some level, I don’t really care how things go with America as long as it’s fun to watch.” (Say what you want about the tenets of Trumpism: at least it’s not an ethos!) 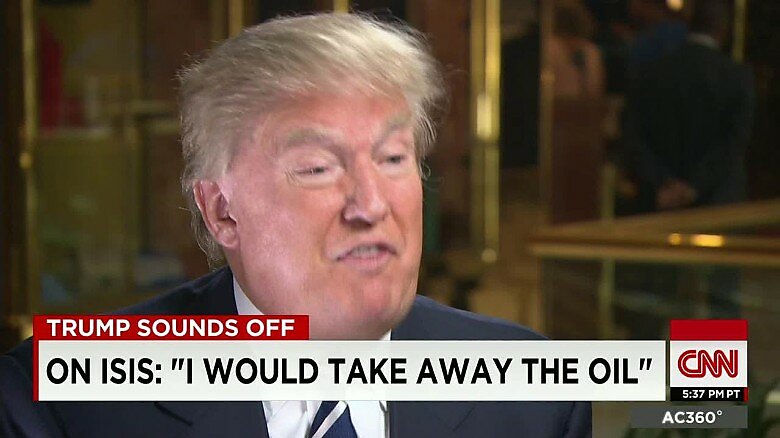 But if watching things burn down and blow up is what you want out of politics, the other candidates may have a lot more to offer you—or so I argue in a column for the Federalist this week, “Trump’s Biggest Lie: ‘I’m The Most Militaristic Person’ In This Race.” That’s what Trump said upon his return to Fox News last week, and, even for the Donald, it’s a boast too far. The fact is, “in the 2016 election cycle, the ‘serious and responsible’ candidates for the presidency are so bellicose they make Trump look like Cindy Sheehan.”


To take just a couple of examples from the piece, there’s:

Wisconsin governor Scott Walker, who in June, refused a reporter’s invitation to rule out “a full‐​blown re‐​invasion of Iraq,” and in July, announced that he’d “very possibly” need to start bombing Iran on his first day in office.

stands out among his competitors as the sole Republican to argue that Obama’s real mistake in Libya was that he didn’t start bombing even sooner. Rubio wants to double down on the profligate interventionism of the George W. Bush era so badly that he’s built his campaign on B‐​movie slogans and neocon buzzwords. A Liam‐​Neeson‐​style “we will find you; and we will kill you” [is his] message to ISIS… and his website promises “A New American Century,” – a pledge that ought to give pause to anybody old enough to remember how that worked out in the last decade.

Even candidates with residual sympathy toward an earlier tradition of Republican realism have begun to toe the party line. Rand Paul has begun to sound distinctly hawkish lately, and Jeb Bush has decided it just “wouldn’t be prudent” to hire a foreign policy director who’s skeptical about bombing Iran.


Trump, on the other hand, seems determined to demonstrate his unseriousness by denouncing the Iraq War, saying he wouldn’t “rip up” the Iran deal, and complaining that America has become “the policeman of the world.”


Meanwhile, no one in this crowd can out‐​hawk Hillary Clinton, whose long, ghoulish career can be summed up in her own words, “I urged him to bomb.” “We came, we saw, he died,” is how HRC greeted the news that Colonel Qaddafi had been killed by a rebel mob. The best the Donald could do was brag about how this one time, he really “screwed” Qaddafi in a real estate deal. Wimp!


Look, don’t get me wrong: Trump is a boorish self-promoter—and worse, a literal “robber baron,”—the sort of guy who’d invoke eminent domain to try steal a retired widow’s house so he can use it for a limousine waiting area. The GOP should be embarrassed to have him leading the pack. But, “most militaristic”? Not by a long shot. As I argued in the Federalist, “on this issue, in this field, he’s not quite the embarrassment he should be.” Read the whole thing there.