The Trump administration has released its federal budget for 2019. The document lays out various reform proposals and provides projections of revenues and spending through 2028. The projections are a little outdated already given the budget‐​busting spending deal reached last week, but it is still interesting to take a look.


The chart compares Trump’s proposed revenues and spending to the most recent CBO baseline projections from last June (which run through 2027).


Despite the large tax cut in December, the Trump administration is projecting federal revenues to be higher in years after 2023 than did the CBO before the cuts were enacted. The administration is assuming strong economic growth of about 3 percent in coming years, partly based on the benefits of tax reform and its deregulatory initiatives.


On spending, the administration projection assumes that it can move various cut proposals through Congress, generating large savings down the road. But with a spendthrift attitude currently prevailing in Congress, such reforms seem optimistic. Note that the CBO projections do not incorporate last week’s discretionary spending increases, whereas Trump’s figures include large defense increases and large nondefense cuts in coming years. 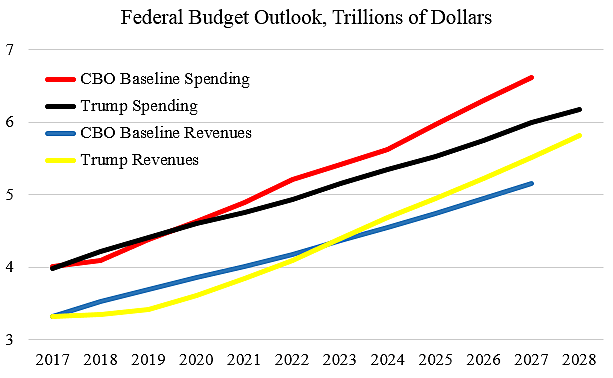