President Trump continued his grumbling about Amazon this morning, echoing common but misguided views about the states being hurt by the rise of retail sales over the Internet. NPR has said, “The big problem is a loss of sales tax revenues as online sales climb.” And a coalition of states recently complained that online sales are imposing an “ever‐​increasing toll on the states’ fiscal health.”


But government data does not show any substantial “toll.” The chart shows total state‐​local revenues from income and sales taxes as a percentage of gross domestic product (GDP). E‐​commerce sales have grown to nine percent of retail sales, but sales tax revenues have nonetheless roughly kept pace with economic growth.


Since 1990, sales tax revenues (including excise taxes) have dipped only slightly from 3.1 percent to 3.0 percent of GDP.


Meanwhile, state‐​local income tax revenues have fluctuated with the economy, but have trended upward. They have risen from 1.8 percent of GDP in 1990 to 2.1 percent today.


Overall, state‐​local tax revenues (including property and other taxes) have edged up since 1990 from 8.7 percent of GDP to 8.8 percent.


It is not a lack of revenue that is taking “a toll on the states’ fiscal health,” but, rather, ever‐​increasing spending on Medicaid and worker pensions, as the Wall Street Journal discusses today. 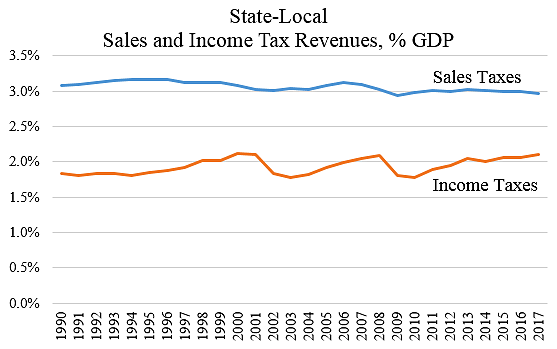