Today, the Department of Homeland Security (DHS) released a report detailing deportations (henceforth “removals”) conducted by Immigration and Customs Enforcement (ICE) during the fiscal year of 2017.  This post presents data on removals in historical context combined with information from Pew and the Center for Migration Studies. 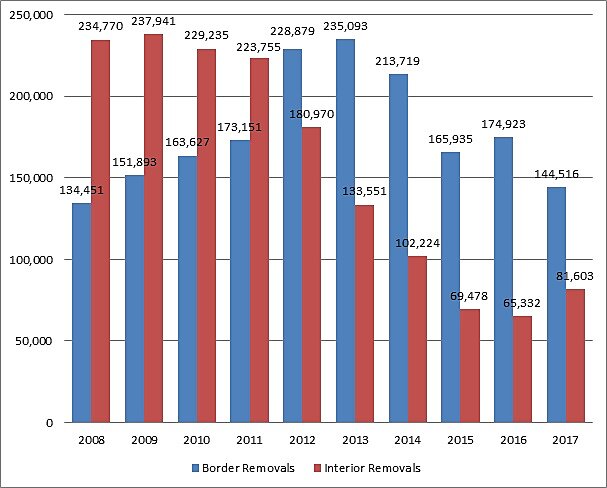 The Obama administration removed 1,242,486 from the interior of the United States during its full eight years, averaging 155,311 removals per year.  Data from the earlier Bush administration are more speculative but they show more deportations under Obama than under Bush.

The percentage of all illegal immigrants removed from the United States is a better measure of the intensity of interior enforcement than the total numbers removed (Figure 2).  Based on estimates of the total size of the illegal immigrant population from Pew, the Center for Migration Studies, and my own guesstimates for 2016 and 2017, 0.74 percent of that population was removed from the interior of the United States in 2017, up from 0.59 percent in 2016 but still below the 2014 percentage.  Interior removals as a percent of the illegal immigrant population peaked at 2.11 percent in 2009.

Removals as a Percent of the Illegal Immigrant Population 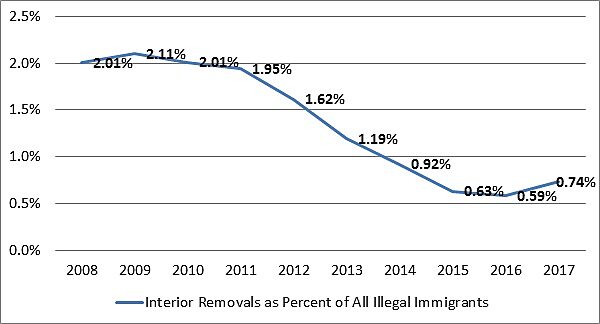 President Obama’s administration removed an average of 1.38 percent of the interior illegal immigrant population each year of his presidency.  The Obama administration’s interior removal statistics show a downward trend beginning in 2011 and continuing until through the end of the fiscal year 2016.

Criminal Removals as a Percent of All Removals 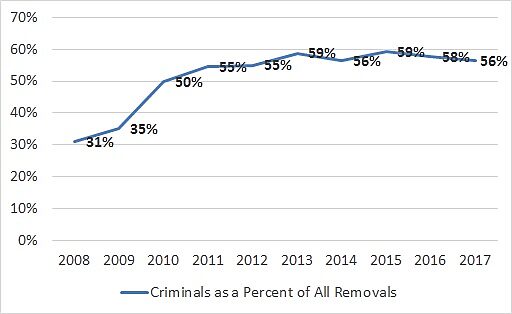