I've mentioned before on this blog the strange idea apparently supported by some in the Trump administration that the U.S. government should conduct trade talks with individual EU member states, even though the EU itself has responsibility for trade policy and under EU law member states are not allowed to negotiate on these issues bilaterally.  The Trump administration view on this issue may be based on a number of factors, including a general skepticism about international institutions such as the EU.  But I suspect one reason is their misguided focus on bilateral U.S. trade deficits.  They see a big trade deficit with Germany, and they want to go after it.

On trade with Germany, I think we’re going to do fantastically well.  Right now, I would say that the negotiators for Germany have done a far better job than the negotiators for the United States.  But hopefully we can even it out.  We don’t want victory, we want fairness.  All I want is fairness.

Germany has done very well in its trade deals with the United States, and I give them credit for it, but -- and I can speak to many other countries.  I mean, you look at China, you look at virtually any country that we do business with.  It’s not exactly what you call good for our workers.

When Trump says German negotiators have "done very well," presumably he is referring to the existence of a U.S. trade deficit with Germany.  In his mind, a trade deficit means the U.S. negotiators did a bad job, and the Germans "won" the negotiation.  But as Merkel pointed out, "When we speak about trade agreements, ... the European Union is negotiating those agreements for all of the member states of the European Union, ... ."  So regardless of the U.S. trade balance with Germany, German negotiators did not play much of a role here.

Earlier this month (before the Merkel visit), White House Trade Council Director Peter Navarro (read more about him here) spelled out the Trump view in a little more detail, during a Q & A session after a talk he gave:

Question: Let's move to Germany now. Here's a question about Germany. You mentioned the possibility of negotiating a trade deal with Germany. Is that a goal of the administration, and how would you do that, since Germany is a member of the EU and doesn't have an independent trade policy?

Peter Navarro: Sure. This is the problem with Germany. It is able, basically, to use the argument that they're in the eurozone, therefore they can't have any kind of discussions with the United States about reducing their almost $70bn trade deficit. That may or may not be true. I think that it would be useful to have candid discussions with Germany about ways that we could possibly get that deficit reduced outside the boundaries and restrictions that they claim that they are under. But it's a serious issue. Germany is one of the most difficult trade deficits that we're going to have to deal with, but we're thinking long and hard about that and I know that Angela Merkel is coming here soon, and perhaps there will be some discussions about how we can improve the German-U.S. economic relationship. And I'm sure they can teach us a thing or two about how to get more of the workforce in manufacturing.

Navarro seems skeptical of the EU's role in conducting trade policy on behalf of EU member states, and suggested direct talks with Angela Merkel about the U.S. trade deficit with Germany.  Now, as noted above, and as Merkel indicated last Friday, EU law is pretty clear that trade policy is to be carried out by the EU, not the member states, but just for fun, I thought I would take Navarro's reasoning to its logical conclusion.  He wants to ignore the EU, and focus on Germany.   But if we really want to identify the true source of the trade deficit, keep in mind that Germany is made up of 16 federal states.  Here's the trade balance between the United States and each of these states: 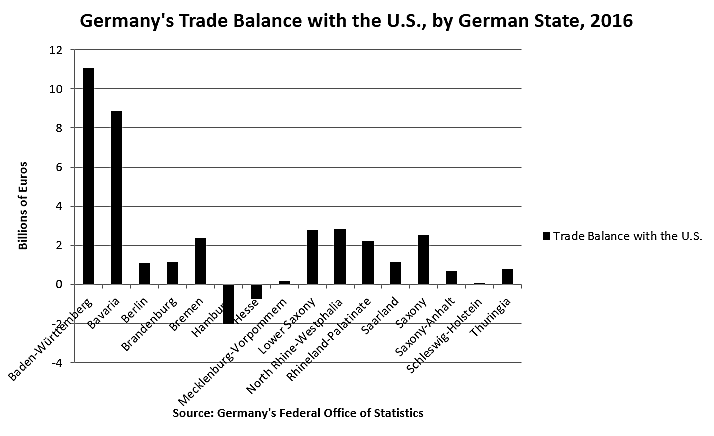 So as you can clearly see, the "problem" is not really with Germany, but with only some of the German states.  Therefore, under the Navarro approach to trade policy, this issue is not something to be discussed with Chancellor Merkel, but rather with the heads of these particular German states.

And by the same logic, of course, it's not necessarily a problem for the U.S. federal government either. We would need to break down U.S. trade flows for each U.S. state, and alert the relevant state Governors about their trade deficits with their German state counterparts.

Summing all this up: The overall U.S. trade deficit has not harmed the U.S. economy, bilateral trade balances are not an indicator of success or failure in a trade agreement, and data on trade balances from jurisdictions within a single economic area (i.e., the EU) takes the issue into new levels of irrelevance.  But regardless, if the Trump administration trade folks want to talk about trade policy with the Europeans (and they should), they should talk about it with the EU trade officials who are in charge of this issue.