Anti‐​wealth fever grips the Democratic Party and seems sure to carry into the election year. Bernie Sanders and Elizabeth Warren are leading the billionaire bashing binge, but even rising star Pete Buttigieg says that he is “all for a wealth tax.”

Leftist politicians dish out lots of rhetoric about wealth, but they seem ignorant of how it is created and used. They assume that top wealth is just expensive toys such as luxury yachts.

Actually, most wealth of the wealthy is business assets, not personal assets, as discussed in my op‐​ed in The Hill today. The chart below shows the components of wealth of the richest 0.1 percent of Americans. Forty‐​two percent is equity in private businesses and 31 percent is equity in publicly traded businesses. Another 22 percent is bank deposits, debt, pensions, and other assets. Just 5 percent of this group’s wealth are their homes.

A rough guess is that one quarter of the deposits, debt, pensions, and other assets are holdings of government debt. That means almost 90 percent of the wealth of the top 0.1 percent of Americans consists ultimately of equity and debt in businesses, which in turn funds the capital investments that create jobs and spur economic growth.

Leftists often claim or imply that wealth at the top comes at our expense, but the reality is the opposite. Wealth at the top supports jobs, opportunities, and incomes for millions of other Americans.

My Hill piece is here. A full discussion of wealth inequality is here and wealth taxation here. 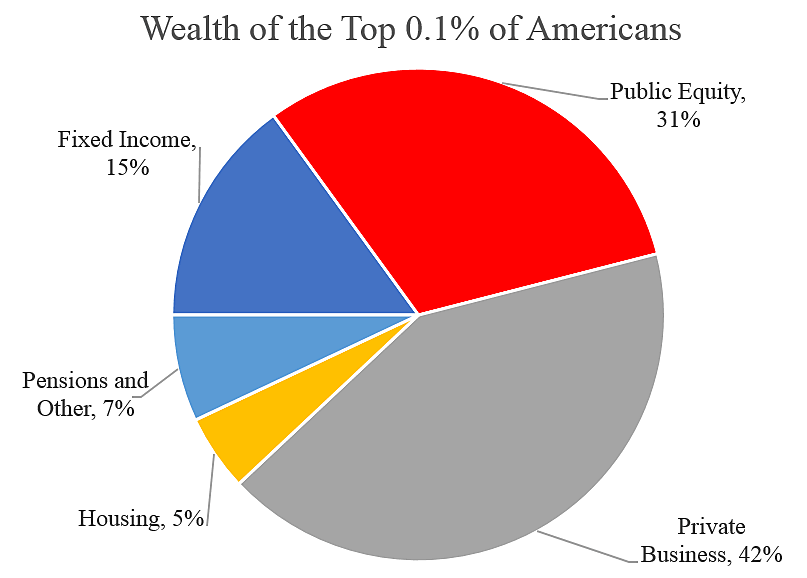