As federal policymakers gear up to battle over federal spending and the budget sequester this Fall, it is interesting to consider past efforts at restraint. President Calvin Coolidge, for example, held the federal budget down to about $3 billion seven years in a row, while cutting taxes and bringing the federal debt down from $22 billion to $17 billion.

President Thomas Jefferson pursued his own rough sequester, and substantially reduced the federal debt that had accumulated under the Federalists. In a 1799 letter to Elbridge Gerry, Jefferson said “I am for a government rigorously frugal and simple, applying all the possible savings of the public revenue to the discharge of the national debt.” Jefferson more or less followed through over his two terms. He kept total federal spending at about $9 to $10 billion, although his downsizing efforts were thrown off by various contingencies.

Figure 1 shows the basic story. Federal spending rose substantially under Presidents George Washington and John Adams, but then flattened under Jefferson between 1801 and 1809. Federal debt fell from $83 million in 1801 to $57 million in 1809. The drop in debt was impressive, especially considering that the government swallowed $13 million of added debt during that period from the Louisiana purchase. The success of Jefferson—and his Treasury Secretary Albert Gallatin—in reducing debt stemmed not from cuts to overall spending, but from simply ensuring that revenue increases from a growing economy went toward paying down the debt rather than expanding the government. 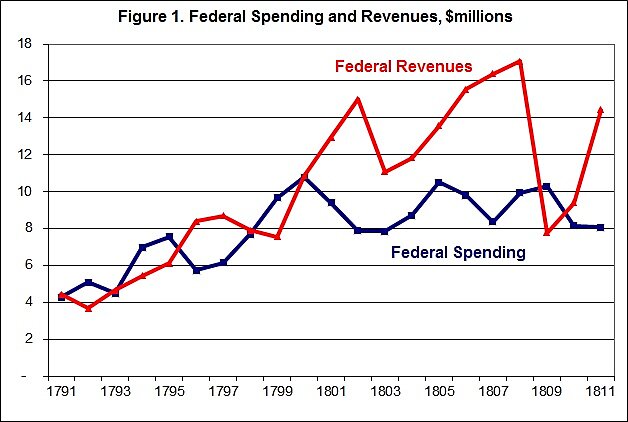 One lesson for today is that all we need to start getting our huge federal debt under control is some modest spending restraint. Large cuts would be better, but even holding overall spending roughly flat for a number of years would start the debt tumbling downward. Looking at CBO’s latest projections, for example, if policymakers held federal spending steady at this year’s $3.5 trillion, the rise in revenues in coming years would be enough to balance the budget by 2016.

Let’s take a closer look at Figure 1, where each of the spending spikes tells a story. The spike in 1794-1795 stemmed from military expenses to put down the Whiskey Rebellion. The spike in the late-1790s was the Army and Navy build-up under President Adams. The spike in the middle of Jefferson’s tenure was partly from payments to Britain of about $1 million a year for three years as part of the earlier Jay Treaty. The costs of the Barbary War also added about half a million dollars to spending in both 1804 and 1805.

Unfortunately, the War of 1812 sidetracked the Jefferson-Gallatin plans on tax and debt reduction for a number of years. The Embargo Act of 1807 slashed federal revenues, and internal taxes were reimposed in 1813 to help fund the war. However, internal taxes were repealed again under President James Monroe in 1817, and they were not reimposed until the Civil War. So the Jeffersonian tax reform approach did have long-lasting influence.

It’s a similar story with debt. Jefferson and Gallatin hated government debt, but their long-term plan to eliminate it was sidetracked by the war. After reaching a low of $45 million in 1812, federal debt soared to $127 million by 1816. But again, Jeffersonian ideas had lasting influence, and federal debt started falling again under President Monroe. Federal debt was eliminated by 1835, and although it started rising again after that, it remained at low levels until the Civil War. Between 1816 and 1860, the federal budget was balanced 30 out of 45 years.

Figure 2 compares annual average spending under the one term of John Adams and the two terms of Thomas Jefferson. Interest was by far the largest expense, and it was only toward the end of Jefferson’s second term that it started falling as the debt was reduced. The Jefferson-Gallatin spending cuts were mainly focused on the Army and the Navy. The increases to Foreign Affairs and Miscellaneous under Jefferson were mainly due to extraordinary expenses, including the Barbary War and the Jay Treaty payments. The “Civil List” was the basic federal bureaucracy, and it remained fairly flat between the two administrations. Finally, the Indian Department had an increase under Jefferson, which I imagine stemmed from the government continuing to sign new treaties, which usually entailed grabbing Indian land in return for long-term federal aid to the tribes. 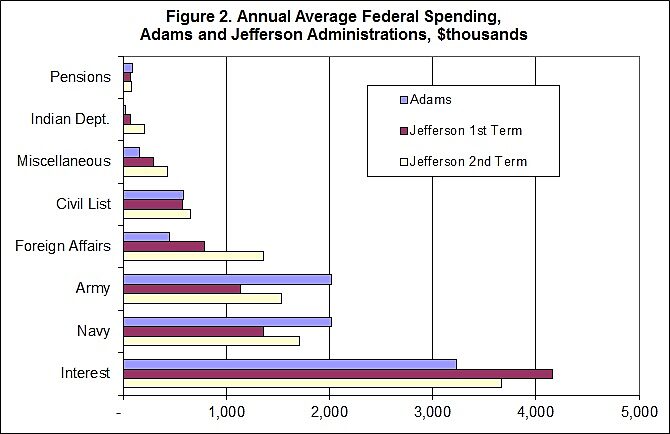 Here are some sources of historical budget data and analysis: