Think Tanks and the Iraq War

As I noted last week, the GOP’s 2016 contenders didn’t do themselves much credit as they ducked, covered, cringed, and pratfell through a series of interview questions about the Iraq War. Still, Jeb Bush had a point when he noted that, at the time, “almost everybody” in political Washington was for the war. True enough: as policy disasters go, the Iraq War was as bipartisan as the subprime loan crisis.


On the war’s tenth anniversary a couple of years back, the New Republic’s John Judis recalled “what it was like to oppose the Iraq War in 2003.” His memory jibes with mine: it was pretty damned lonely. Well before “Shock and Awe,” hawkish arguments had achieved near full‐​spectrum dominance over the minds of Beltway policy elites, and the invasion and occupation of Iraq was shaping up as a horrific idea whose time had come. 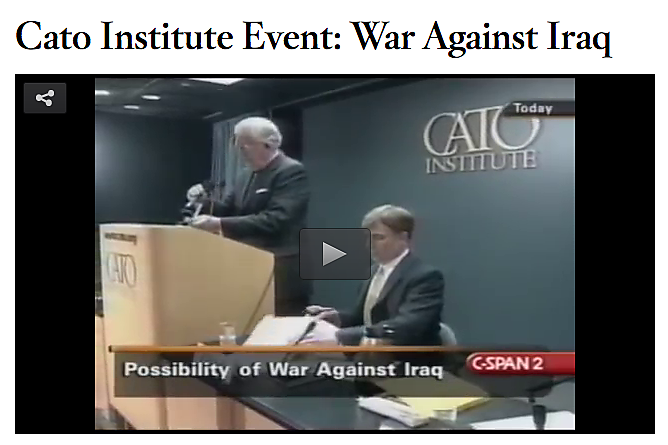 But it rankled a bit when Judis wrote that “except for Jessica Mathews at the Carnegie Endowment for International Peace, Washington’s thinktank honchos were also lined up behind the war.” Not to take anything away from Ms. Mathews, but the late, great Bill Niskanen had to count as a “think tank honcho” if anyone did, and he opposed the war vigorously, early, and often.


In a December 2001 public debate with former CIA director James Woolsey, Niskanen, then Cato’s chairman, offered the first prominent public statement by a DC think‐​tank leader against that looming debacle: “An Unnecessary War Is an Unjust War,” Bill argued. In the run‐​up to the invasion, other Cato scholars argued, among other things, that:

At the time, opposition to the Iraq War was controversial even within the building—and outside of 1000 Massachusetts Ave., Cato’s Iraq War skeptics had very little company among the Beltway cognoscenti.

For example, both inside and outside the Bush administration, American Enterprise Institute scholars played a key role in making the case for war. As Bob Woodward reported in his 2006 book State of Denial, in late 2001, Paul Wolfowitz approached then‐​AEI president Chris DeMuth to put together a secret task force of top thinkers to generate “the kinds of ideas and strategy needed to deal with a crisis of the magnitude of 9/11.” They called themselves “Bletchley II,” after the British cryptographers who cracked Axis communication codes during WWII.


Bletchley II participants included Fareed Zakaria (who should have known better), James Q. Wilson, Reuel Marc Gehrecht, Fouad Ajami, Robert Kaplan, and Bernard Lewis. The team generated “a seven‐​page, single‐​spaced document, called ‘Delta of Terrorism.’ ‘Delta’ was used in the sense of the mouth of a river from which everything flowed.” Rumsfeld adviser Steven Herbits summed up the memo’s message: “We’re facing a two‐​generation war. And start with Iraq.” (Boy, I’d love to see that memo.)


Over on the center‐​left, Brookings scholars proved instrumental as well—Kenneth Pollack’s The Threatening Storm: The Case for Invading Iraq played a key role in getting center‐​left opinion leaders behind the war, convincing, among many others, the New Yorker’s David Remnick that “a return to a hollow pursuit of containment will be the most dangerous option of all.”


It’s supposed to be conservatives’ job to stand athwart history, yelling “stop!” and liberals’ role to resist the rush to war. For the most part, DC’s think tanks left that job to the libertarians, with predictable results. In 2004, after the die was cast, Cato was the first major DC think tank to offer an extended argument for Exiting Iraq, in Chris Preble’s book of that name.


I wouldn’t call Cato’s Iraq skeptics “prescient,” nor would I claim that everything we wrote holds up well a decade and a half later; for example, like several of my colleagues, I engaged in a little WMD fearmongering of my own in the early days of the war, warning that “components for a ‘dirty bomb’ may already be in the wrong hands” thanks to the invasion. (Cato’s Alan Reynolds, who decried the WMD “hype,” had the better view). But it would be nice if, when a major daily prints one of those “what to do in Iraq?” symposia, they occasionally think to call somebody, like Ted Carpenter or Chris Preble—who got it right in the first place.


It would be even better if the GOP’s 2016 contenders weren’t still, 12 years later, so eager to seek foreign policy advice from people who got the Iraq War Question spectacularly wrong.


The Washington Post reports that Scott Walker’s “crash course” in foreign policy is led by tutors like “[Elliot] Abrams, Bush’s deputy national security adviser, and [AEI’s] Marc A. Thiessen, a Post columnist and former Bush speechwriter known for his staunch defense of waterboarding and other interrogation tactics barred by President Obama. Walker selected Thiessen to co‐​write his 2013 book, Unintimidated, and the two men became confidants during hours of Skype conversations each weekend.” Marco Rubio’s team includes a kettle of Iraq hawks like Abrams, Eric Edelman, and Brookings’ Robert Kagan. There’s no word yet on who’s advising Rick Perry, but last time around he sought out Iraq War architect Doug Feith, now with the Hudson Institute. It was a bit unfair for then‐​CentCom commander Gen. Tommy Franks to call Feith “the dumbest [expletive deleted] guy on the planet,” given Earth’s seven billion‐​plus people, but Feith’s hardly the first person you’d want to turn to if you wanted to avoid the costly foreign policy blunders of the past decade.


For his part, Jeb Bush has sought out a number of key figures “present at the creation” of the Iraq debacle, like Paul Wolfowitz, who, as US forces drove toward Baghdad, in March 2003, promised Congress icing on the cakewalk: “There is a lot of money to pay for this that doesn’t have to be U.S. taxpayer money…. We are talking about a country that can really finance its own reconstruction and relatively soon.”


Given that background, you might suspect that there’s just no accountability for GOP foreign policy advisers; but that isn’t so. The Wall Street Journal recently reported that “Elbridge Colby, a fellow at the Center for a New American Security, was being seriously considered for a job as foreign policy director in Mr. Bush’s expanding organization, [but] according to a person familiar with the campaign’s internal deliberations, Mr. Bush’s political operation raised concerns about Mr. Colby’s published views on Iran. Mr. Colby has prominently advocated against a military strike on Iran and has called for the Republican Party to move closer to its roots of pragmatism and containment.” So he’s out. You can’t expect to retain your political and professional credibility after a screw‐​up like that.