There Is No Public Safety Justification for the “Travel Ban”

The government has many categories of countries that are marked as terrorist threats. These categories of countries are divided by their level of sharing of immigration and travel security with the U.S. government, the operation of foreign terrorist organizations on their soil, whether they are sponsors of terrorism, whether they border terrorist safe havens, if they refuse to accept deportees, and other criteria. The incarceration rate for folks born in the countries in these categories varies dramatically (Figure 1). 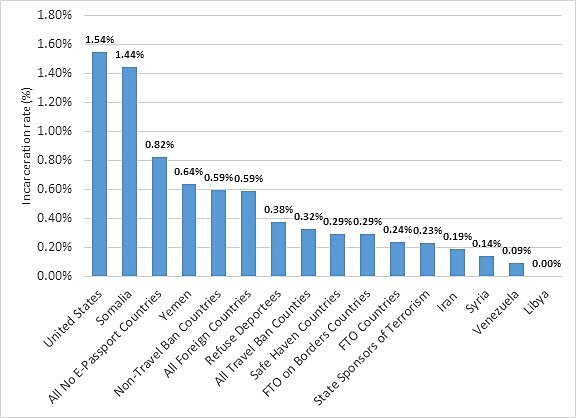 We calculated the figures from the 2015 1 year American Community Survey (ACS) sample from IPUMS. It focuses on people between the ages of 18 to 54 who are incarcerated in the United States, their incarceration rates, and their demographics. The ACS inmate data is reliable because it is ordinarily collected by or under the supervision of correctional institution administrators. These estimates include all foreign-born people who are incarcerated regardless of legal status.

One weakness of the ACS data is that we cannot help but over count the incarceration rate. That is because we can only look at those who are in group housing, a category that includes adult correctional facilities, mental health hospitals, homes for the handicapped, and elderly care institutions. We partly adjusted for this by narrowing the age range to 18-54 so as to exclude many inmates in mental health and retirement facilities. Still, this method over counts by about 800,000 prisoners.

Special thanks to Michelangelo Landgrave for crunching most of the numbers that went into this blog post.