One person was murdered in a likely terrorist attack in Charlottesville, Virginia this Saturday when a suspected white nationalist named Alex Fields Jr. drove his car into a group of protesters. Prominent people on both sides of the political spectrum have condemned the politically motivated violence. However, some commentators have pointed out that left wing terrorists and rioters have also committed violence in recent years, though they have not provided any data with which to compare the relative scale of the violence. This blog fills that void by describing terrorist murders and injuries by the political ideology of the perpetrators. Also, though the chance of being murdered or injured in a terrorist attack is minor, there is wide variation in the ideology of terrorists.

This post examines 25 years of terrorism on U.S. soil from 1992 through August 12, 2017. Fatalities and injuries in terrorist attacks are the most important measures of the cost of terrorism. The information sources are the Global Terrorism Database at the University of Maryland and the RAND Corporation. Other organizations seem to count many religiously or racially motivated crimes as terrorist offenses, an overcounting that I attempted to avoid. I estimate the number of murders committed by terrorists in 2017 from online sources although they may be incomplete. As much as possible, I excluded terrorists who died or were injured in their attacks as they are not victims.

I grouped the ideology of the attackers into four broad groups: Islamists, Nationalists and Right Wingers, Left Wingers, and Unknown/Other. Global Terrorism Database descriptions of the attackers and news stories were my guide in organizing the groups by ideology. Islamists and unknown/other straightforward. Left Wing terrorists include Communists, Socialists, animal rights activists, anti-white racists, LGBT extremists, attackers inspired by Black Lives Matter, and ethnic or national separatists who also embrace Socialism. Nationalist and Right Wing terrorists include white nationalists, Neo-Confederates, non-socialist secessionists, nationalists, anti-Communists, fascists, anti-Muslim attackers, anti-immigration extremists, Sovereign Citizens, bombers who targeted the IRS, militia movements, and abortion clinic bombers. Some of the marginal attacks are open to reinterpretation but the ideology of the attackers by death and injury are straightforward in virtually all cases.

Terrorists have murdered 3,342 people on U.S. soil from 1992 through August 12, 2017 (Figure 1). Islamists committed 92 percent of all those murders and are, far and away, the deadliest group of terrorists by ideology. The 9/11 attacks accounted for 2,983 of the 3,085 Islamist-inspired terrorist deaths—an overwhelming 97 percent. The chance of being murdered in a terrorist attack committed by an Islamist during this period was about 1 in 2.5 million per year (Table 1).

Murders in Terrorist Attacks by the Ideology of the Attacker, 1992-2017. 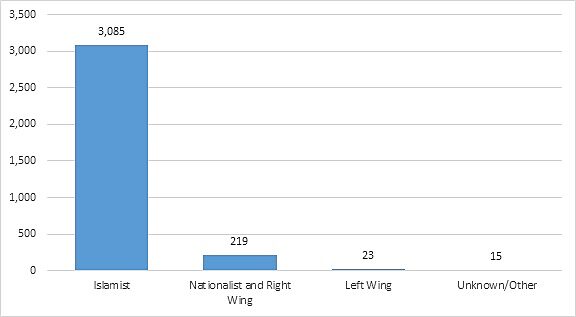 Annual Chance of Dying in a Terrorist Attack by Ideology of Perpetrator, 1992-2017

Injuries in Terrorist Attacks by the Ideology of the Attacker, 1992-2017. 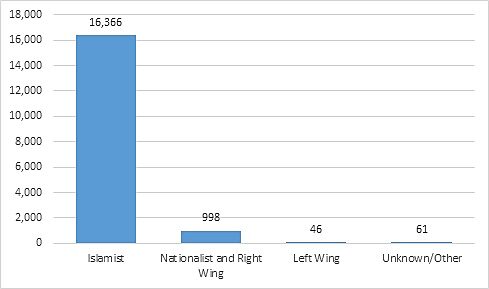 Annual Chance of Being Injured in a Terrorist Attack by Ideology of Perpetrator, 1992-2017

The risk of being killed or injured in a terrorist attack on U.S. soil is small. However, a comparison to other intentional harms can put the risk in perspective. The chance of being murdered in a non-terrorist homicide from 1992 through 2017 was about 1 in 17,000 a year, which is about 133 times as great as being killed by terrorism during that time.

Islamism is an ideology created overseas, while much of the ideology that inspires Nationalist, Right Wing, and Left Wing terrorism is home grown or it has been here for so long that it might as well be.

Islamist terrorists are the deadliest since 1992. They killed about 14 times as many people as Nationalist and Right Wing terrorists who, in turn, killed about 10 times as many people as Left Wing terrorists did. The deadliness of terrorists by ideology has changed over time and will continue to do so. Charlottesville was a tragedy and the person responsible should be tried and, if convicted, punished to the fullest extent possible under the law. However, it is important to realize that the actual scale and scope of the recent terrorist threat differs significantly by ideology even though the annual chance of being murdered in such an attack is still small.