Cruz says that as President he’ll spend 4.1 percent of gross domestic product (GDP) on defense for two years, and 4 percent thereafter. As the chart below shows, under standard growth predictions, Cruz’s plan produces a massive increase in military spending: about $1.2 trillion over what would be Cruz’s first term and $2.6 trillion over eight years. Details on the chart are at the end of this post. 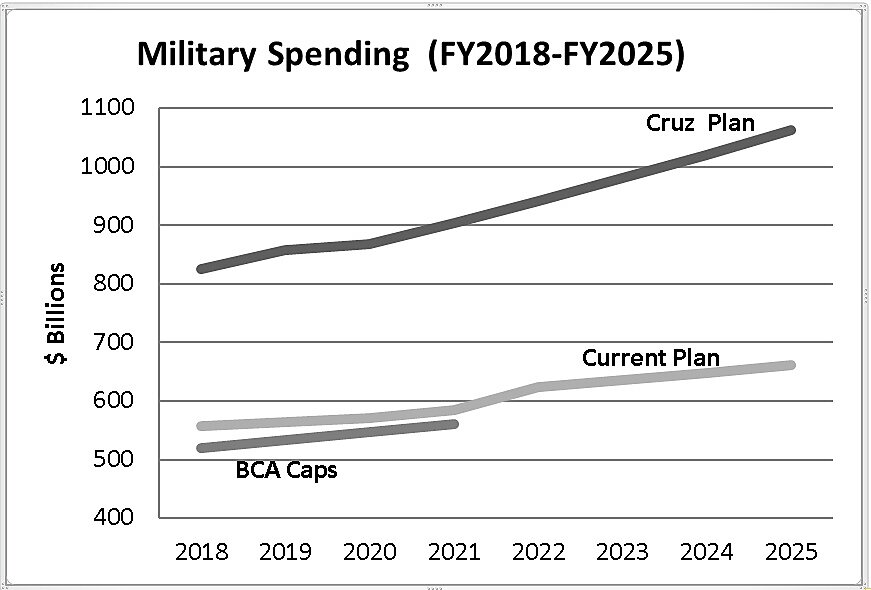 The chart also shows how much Cruz’s plan exceeds the Budget Control Act’s caps on defense spending, which remain in force through 2021. Spending bills exceeding those caps trigger sequestration: across-the-board cuts that keep spending at the cap. So Cruz’s plan depends on Congress repealing the law. Experience suggests that Congress will instead trade on dodgy future savings to raise caps by twenty or thirty billion a year—about a tenth of what Cruz needs.

Cruz is relatively clear on the tooth—force structure—he hopes to buy. He’d grow the Army’s end strength to 1.4 million, with at least 525,000 in the active force. Those numbers are scheduled to fall to 980,000 and 450,000 in 2018. Cruz would “reverse the cuts to the manpower of the Marines,” which presumably means going from the current 182,000 active to the 202,000 peak size reached in 2011 for the Iraq and Afghanistan wars. The Navy would grow from 287 to at least 350 ships, and the Air Force would add 1,000 aircraft to reach 6,000. The plan would also modernize each leg of the nuclear triad of intercontinental ballistic missiles, bombers and submarine-launched ballistic missiles. It asserts that the triad is “on the verge of slipping away,” ignoring current plans to modernize each leg, needlessly.

Despite the plan’s “paying for rebuilding” section, Cruz is unclear on how he’ll fund the buildup. The “less tail” option is a red-herring. The implication, standard among those trying to look fiscally responsible while throwing money at the military, is that you cut administration to pay for force structure. But Cruz doesn’t sustain the pretense beyond attacking the Pentagon’s “bloated bureaucracy and social experiments.” He never identifies what bureaucracy—commands, budget line or contracts—he’d axe. He doesn’t explain how to overcome the Pentagon’s tendency to increase overhead during buildups or betray concern about the meager results of past efforts to shift tail to tooth. He complains about “12,000 accountants in the Pentagon,” but between its buildup and push to audit the Pentagon, the Cruz administration would need thousands more. Cruz’s refusal to “bow to political correctness,” evidently does not cover politically-dicey efficiency measures like another Base Realignment and Closure round and reforming military benefit and compensation packages. Neither does Cruz say how his idea of social experiments, like letting gays serve openly or accommodating soldiers allergic to gluten, add costs.

Cruz, of course, will not fund his buildup through taxes. Instead, the plan mentions selling federal assets, unspecified spending cuts, and tax revenue juiced by four or five percent annual growth. Wishful thinking seems a fair summary. Asset sales would only help marginally. The plan lacks a method for abolishing Democrats, who will almost certainly retain enough Senators to keep non-defense discretionary spending pegged to defense, or to make entitlement cuts politically unpalatable. And betting that you can vastly outperform typical growth isn’t sound planning.

That leaves debt as the most likely way President Cruz will fund his buildup, adding to the pile he already plans. And that helps explain why Cruz’s defense plan won’t happen. With CBO’s recent estimate of accelerated deficit growth, the politics constraining Pentagon spending should last. Assuming Democrats and vulnerable Republicans continue to block big entitlement spending cuts and Republicans prevent tax increases, concern about deficits translates into pressure to restrain discretionary spending, of which defense is more than half.

Also in the unclear category: the rationale undergirding the plan. Cruz’s force structure hopes, which he doesn’t price, have little to do with his 4 percent spending goal, beyond a general commitment to more. As Matt Fay explains, spending four percent of GDP on defense is to punt on strategy, which involves prioritizing resources to meet threats. Threats don’t grow with wealth or fade with poverty.

Cruz’s force structure suggestions also lack a strategic basis. Cruz criticizes nation-building wars and worries about China. But rather than distribute his buildup accordingly by focusing it on the Navy and Air Force, he gives equally to the ground forces. Ultimately, Cruz proposes spending a lot more to do what we are now doing. Like Jeb Bush, Marco Rubio, and even Dick Cheney, Cruz’s rhetorical assaults on the Obama administration’s defense policy belie underlying agreement with its premises. I attack those bipartisan beliefs in various other places.

The chart covers 2018-2025 because those are the first and last fiscal year budgets that the next administration will plan, assuming it wins a second term. For GDP growth, the chart uses recent Congressional Budget Office projections. The current spending plans are in budget authority and come from the Pentagon’s new five year defense spending plan (see figure 1-3 on page 1-5) and Office of Management and Budget estimates for subsequent years (table 28-1). These plans track “national defense” (budget function 050), minus overseas contingency operations funding. That spending track falls under 3 percent of CBO’s GDP prediction in 2018 and slides toward 2.5 percent by the mid 2020s.  The caps are on page 13 here. All figures are in nominal dollars.