The legislation complements the priorities of President-elect Trump who complained about “waste, fraud and abuse all over the place,” and promised “we will cut so much, your head will spin.” To know where to cut, Trump and his team will need to learn about hundreds of programs and determine which ones are the biggest failures.

The Trump team can study DownsizingGovernment.org for spending cut ideas. But it would be also useful if the Office of Management and Budget (OMB) provided better information about each federal program.

That’s the thrust of Lankford’s Right-to-Know Act. It would “require OMB to list all [federal] programs, their funding levels, the number of beneficiaries of the programs, and link each program to all related evaluations, assessments, performance reviews, or government reports.” On its website, the OMB would also list the statutes authorizing each program and the number of federal employees, contractors, and grantees who administer them.

Federal agencies work for us. We pay the bills. Agencies should inform us about their failures as well as their successes. Lankford’s legislation would be a step forward, but more needs to be done.

In the photo from the left: Justin Bogie of the Heritage Foundation, me, Senator Lankford, and Tom Schatz of Citizens Against Government Waste. 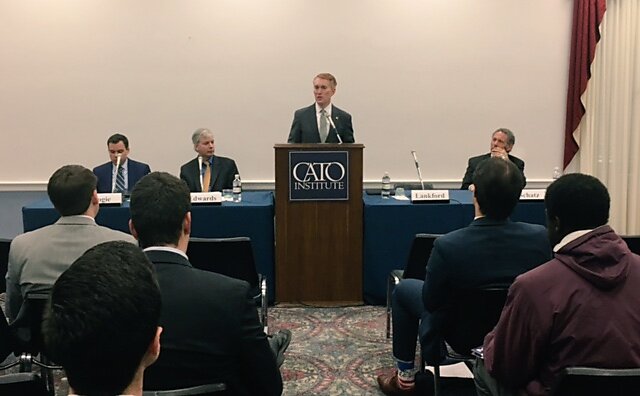