Tax Day is here. In a column about this unhappy day, Christine Emba of the Washington Post provides her views regarding income tax filing and tax simplification.


But then she says:

Meanwhile, the wealthier among us (remember: corporations are people, too!) are able to hire tax lawyers, consultants and accountants to clue them in on lightly advertised but heavily lobbied for loopholes that allow them to pay a lower tax rate or even no taxes at all.

Emba’s language is imprecise, but generally the wealthier among us do not “pay a lower tax rate.” There are exceptions. Agriculture has good lobbyists and many farmers pay little income tax on farming.


However, it is ridiculous to imply that the rich generally pay lower tax rates when the contrary facts are readily available from authorities such as the Urban‐​Brookings Tax Policy Center (TPC).


Emba may be referring to statutory federal income tax rates. These rise from 10 percent to 37 percent, as shown in the first chart below from TPC. The Republican Tax Cuts and Jobs Act (TCJA) slashed statutory rates virtually across the board, but the chart shows that higher earners still pay steeply higher rates. The TCJA also reduced some “loopholes” that the wealthier among us use, such as the state and local tax deduction.


Or Emba may be referring to average effective tax rates, which are total taxes paid divided by income. These are shown in the second chart below from TPC. Looking at the income tax column, the bottom two fifths, on net, pay no taxes. Then the rate rises from 2.5 percent on the middle fifth to 14.3 percent on the top fifth. The top 1 percent—the wealthier among us—pay 23.4 percent.

Perhaps Donald Trump will turn out to be an exception, but the wealthier among us who are campaigning for the White House pay quite high income tax rates. Wealthy Kamala Harris has paid a roughly 32 percent average effective tax rate since she got married. Wealthy Elizabeth Warren paid 25 percent tax on her total income in 2018. And fairly well‐​off Amy Klobuchar paid 21 percent in 2017. 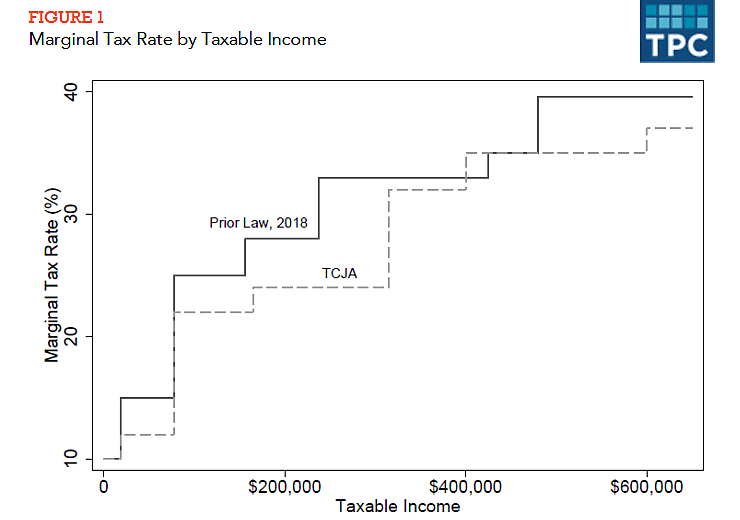