A story in the Washington Post today is headlined: “Obama Would Keep $85 Billion in Tax Breaks for Working Poor.”


The “tax breaks” in question are expansions in the earned income tax credit and the child tax credit. The Post story repeatedly calls the expansions “tax breaks” and “tax cuts.” The budget expert quoted in the story calls them “tax cuts,” and so does a House staffer and a spokesperson for the president.


But these are not tax cuts. They are expansions in the refundability of provisions in the tax code. That means that households that pay no federal income tax will receive larger welfare checks from the government under these Obama proposals.


Obama has proposed a slew of “tax cuts” that are partly welfare payments. The chart below shows the share of the 2010–2019 dollar values of these proposals that are actually increased federal spending, and not reductions in taxes. (Calculated from OMB’s May summary tables). 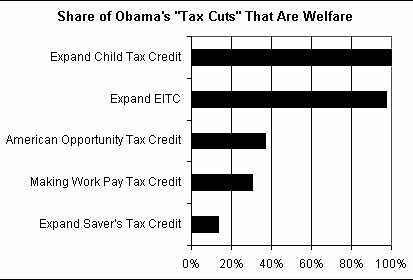 The Post reporter and the budget analyst quoted in the story are both fiscal experts, and they know that these “tax cuts” are not really tax cuts. But there is a growing problem in fiscal discussions that words are getting flipped upside down to mean the opposite of what a layman would understand them to mean. A classic example is how the dollar value of true tax cuts is nearly always referred to in news articles as a “cost” rather than a “saving.”


Steny Hoyer’s use of the phrase “paid for” in the health debate is another example of how Washington‐​speak is confusing the heck out of people.