Take Me to Our “Moral Leader”! 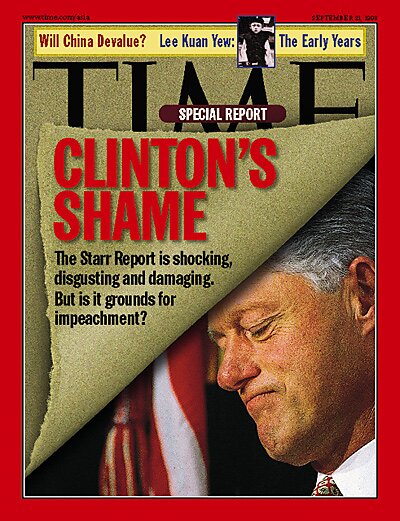 Ripping into President Trump on “Morning Joe” last week, historian Jon Meacham invoked FDR: “the presidency is preeminently a place of moral leadership.” When I heard that, I thought, man: if that’s right, then we are well and truly…er, doomed. But is it right?

A lot of people seem to think so, including some conservatives. In his Washington Post column this week, Michael Gerson laments “the sad effects of President Trump’s renunciation of moral leadership on American politics and culture.” And in a piece titled “Conservatives Need to Remember, Presidents Affect Culture,” National Review’s David French writes that “In 1998, Bill Clinton damaged the culture for the sake of preserving his political hide”; now, “a GOP president is inflicting even deeper wounds.” Instead of minimizing President Trump’s morally blinkered response to the murder at the neo‐​Nazi rally in Charlottesville, French argues, “it’s time for conservatives to remember the cultural power of the presidency” and recapture the moral clarity they had in the Clinton years.


Back then, French argues, conservatives were right to insist that “adultery and perjury matter.” Fair enough: the latter may even have been reasonable grounds for impeachment, though there were better ones, as the great Nat Hentoff noted at the time. Still, where’s the evidence that Clinton’s transgressions “damaged the culture”?


Remember Bill Bennett’s Index of Leading Cultural Indicators? First published in 1994, it armed conservative Cassandras with charts showing the world going to hell on multiple metrics: marriage, sexual license, abortion, drug use, crime, etc. Then a funny thing happened on the way to the Oughties: in the era of Monica Lewinsky and Gennifer Flowers, most of those trends started heading in the right direction.


Toward the end of ‘90s, when the second edition of the Index was being readied, declinism had become a much tougher sell, leaving Bennett harrumphing that: “conservatives are going to have to face the fact that there is some good news on the landscape.”


The taboo against adultery, as measured by the answer to that question, began weakening again around 2008. Whatever drove that trend, it couldn’t have been the examples set by George W. Bush and Barack Obama. They were lousy presidents, but worthy enough role models as far as marriage goes. Maybe the “cultural power of the presidency”—for good and for ill—isn’t as vast as French imagines.

How could it be? There’s abundant political science evidence casting doubt on the notion the Bully Pulpit moves the needle much when it comes to public policy. Transforming the nation’s moral landscape by word or example is a harder job by far.


That doesn’t mean the example Trump sets is irrelevant. His rise to power has obviously had what might be called a “cretin mobilization effect,” emboldening some truly vile people, as French himself has experienced firsthand.


However, when public intellectuals frame Trump’s norm violations in religious terms—“sacrilege” by America’s “high priest and chief unifier,” according to Jonathan Haidt—it makes me itch. We don’t need the president to be a “consoler‐​in‐​chief,” a “theologian‐​in‐​chief,” or any of the various extraconstitutional roles lately proposed for him. This atavistic, quasi‐​mystical orientation towards government is notably absent from the Federalist, where the president is described as a figure who will have “no particle of spiritual jurisdiction.”


The chief executive officer of the federal government isn’t the Great Helmsman of our culture, but he has, in the corporate jargon, an “outward‐​facing role.” By default, he’s the head of state in our system, and Americans have a right to demand some minimum standards of conduct. There are remedies for behavior “grossly incompatible with the proper function and purpose of the office.”


But will Trump’s tenure—however long it lasts—result in what French fears: the widespread triumph of “hate, division, and rage”? Here, I’m skeptical. The overwhelming majority of Americans aren’t so far gone as to take their cues about right and wrong from any president—let alone this one. A good thing too, given that, in living memory, presidents have conducted themselves abominably in their personal relationships, lied us into war, and used “the available federal machinery to screw [their] political enemies.” Anyone looking for a personal role model might do better by randomly selecting a professional athlete or reality‐​show star (some exceptions may apply).


Sure, “presidents affect culture,” but the biggest effect they have is by influencing how we think about the presidency—often in ways they don’t intend. Watergate obviously had an enormous impact on American attitudes toward the office. Nixon’s lawlessness helped puncture the myth of “the implicit infallibility of presidents,” by revealing that the man in the Oval Office could be a petty, paranoid, foul‐​mouthed little crook.


In a less dramatic fashion, Bill Clinton also helped demystify the presidency. As Judge Posner correctly predicted in his book on the Clinton impeachment, that episode’s “most abiding effect… may be to make it difficult to take Presidents seriously as superior people.” If we needed a refresher course in that lesson, we’re certainly getting one right now.