Gross federal debt just hit $14 trillion and will soon reach the legal limit of $14.3 trillion. House Republicans are wondering what spending reforms they can extract from the Democrats for their support of a debt‐​limit increase.


I propose a “Cut and Cap” strategy. The GOP should insist on the $100 billion in initial cuts they promised, and also demand passage of a legal cap on overall federal spending. A simple form of such a cap would specify that total federal outlays cannot rise more than inflation plus population growth each year. If it did, the law would require that the president sequester, or cut, spending across‐​the board to meet the limit.


The chart illustrates the power of such a cap. The top line shows total spending as projected under President Obama’s budget. The president has spending growing at an average annual rate of 5.6 percent between 2013 and 2020, which is absurdly high given that we are running trillion‐​dollar deficits. The bottom line shows spending capped at 3 percent annual growth, which is roughly the sum of expected population growth and inflation. 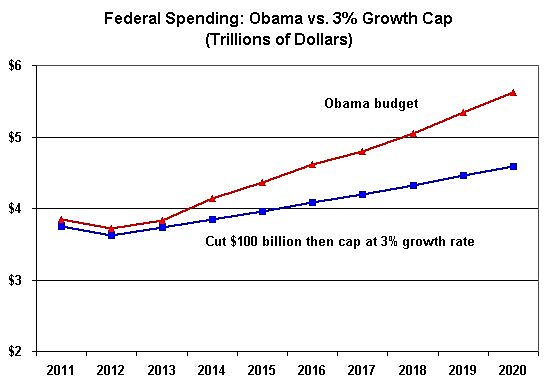 Even with the modest goal of limiting spending growth to 3 percent, the results would be dramatic over time. Spending in 2020 would be $1 trillion less than the president is projecting—$4.6 trillion rather than $5.6 trillion. As a share of GDP, spending would be 19.2 percent instead of Obama’s projected 23.5 percent. That would put the budget close to balance as revenues will be about 18.5 percent of GDP in 2020 with current tax cuts in place.


The chart assumes that the cap and the $100 billion of cuts are put in place right away. However, because Obama’s budget assumes that spending is flat for the next two years as “stimulus” spending peters out, the cap wouldn’t really start biting until 2014.


I’ve discussed a spending growth cap in more detail here and here. One nice feature of such a cap is that any spending cuts achieved would be locked‐​in as the spending limit would ratchet downward to the new lower budget level. So the House Republicans should insist on “Cut and Cap” this year, and then keep on cutting after that.