The Surge in Naturalizations Is Exaggerated

Writers across the political spectrum claim that immigrants are naturalizing at a higher rate to vote against Donald Trump in the 2016 presidential election. No doubt some lawful permanent residents (LPR) are naturalizing in order to vote against Trump, who has made his anti‐​immigration position a major component of his campaign, but the annualized number of petitions filed in the first two quarters of FY 2016 don’t show a big increase over 2015 (Figure 1). 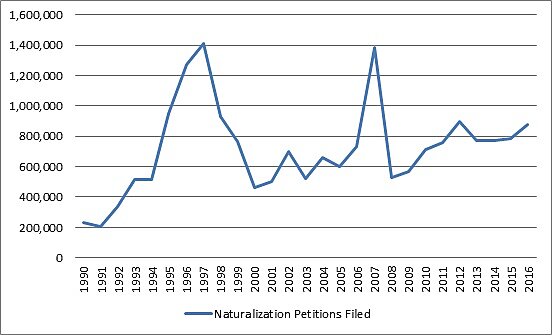 
The Migration Policy Institute notes that the number of FY2016 naturalization petitions filed through March is up 21 percent over the same time in FY2015. If that holds until the end of the year, then there will be about 164,000 additional naturalizations compared to 2015. The annual standard deviation for naturalization petitions filed from 2008–2015 was about 121,000. So, although FY2016 petitions are likely to exceed those of FY2015 by more than a standard deviation, it pales in comparison to increases in previous years.


A better measurement is the annual number of petitions filed as a percent of all eligible LPRs. Department of Homeland Security reports provided most of the numbers while I had to make some estimates for the years 2014–2016 based on trends. According to this rough measurement, the annualized number of FY2016 petitions is only slightly above those of 2015 and below that of 2012 (Figure 2).


Naturalization Petitions Filed as a Percent of All Eligible LPRs 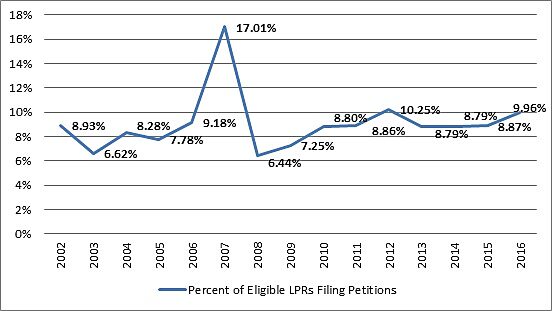 
The 2007 spike was caused by people filing their petitions before an 80 percent increase in naturalization fees went into effect.