Politico notes that Summers suggested “that U.S. corporate tax rates are relatively low, despite complaints from U.S. corporations.” And they quote him: “If you look at taxes paid by corporations as a fraction of profits, they’re actually very low” because the U.S. tax code is replete with “evasion and avoidance.”


The Obama team’s solution to the supposed problem is to pile more complex IRS rules and regulations on U.S. corporations and to increase taxes on their foreign earnings.


There are lots of problems here. One is the implication that the U.S. corporate tax is uniquely subject to evasion and avoidance. It isn’t. Corporate income taxes around the globe are subject to large avoidance and evasion pressures because of globalization and technological advance.


That is one of the main reasons why virtually every other industrial nation has dramatically cut its corporate tax rate over the last decade or so. But the United States has not followed suit, and that’s why U.S. corporations are having to put large efforts into avoidance. 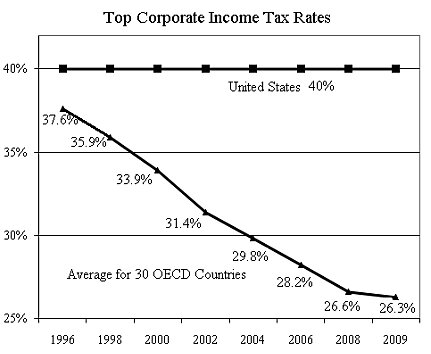 The latest data from KPMG shows that the U.S. federal/​state rate is 40 percent–tied with Libya for the third‐​highest rate among 116 countries surveyed. The chart shows the average rate for the 30 OECD nations.


Anyway, Larry is referring to a measure of the average tax rate. But, generally, it is statutory rates that drive avoidance, and so it is the very high U.S. statutory rate that is helping to shrink federal taxes paid and thus drive down the average rate that Larry is worried about.


Note that lower statutory corporate rates over the last two decades have been associated with higher corporate tax revenues, as Figure 1 illustrates here. Thus, if Larry wants a higher average rate, he should propose cutting the U.S. statutory rate.


Summers apparently wants corporations to “help the country” by paying more taxes. But Larry must know that it is individual workers, consumers, and savers who actually bear the burden of the corporate tax. These people are “the country” and they would be helped by dramatically cutting the corporate tax rate and boosting the economy.