The Student Aid Did It!

The College Board is out with its annual reports on college prices and student aid, and the story is pretty familiar. According to The New York Times, the reports reveal that over the last year tuition and fees rose 8 percent at public, four‐​year schools, and 4.5 percent at private non‐​profits. Meanwhile, student aid rose at a very fast clip. Indeed, over the last five years, despite lightning‐​quick growth in sticker prices, after‐​aid college costs actually dropped.


Now, don’t expect to hear this from the College Board or even mentioned in the Times, but doesn’t it seem at least plausible that giving more and more aid to students enables schools to raise prices? You know, that colleges might jack up tuition and fees knowing that government, largely, will ensure that students can cover them? It’s not only plausible, it’s almost certainly the case. But like I said, forget about ever reading that in The New York Times. Instead, we get this standard lament:

“The College Board figures are depressing and utterly predictable,” said Terry Hartle, senior vice president of the American Council on Education. “When states cut funding for higher education, tuitions go up to make up for the difference.”

Dealing with this one gets incredibly tiresome, and it should infuriate taxpayers who fund both massive student aid and subsidies to public colleges.


For one thing, of course, cuts in state subsidies don’t explain constantly increasing private school costs. Moreover, while no doubt public schools sometimes raise tuition to make up for state funding dips, they also raise it when state funding is going up. Indeed, as this chart from the State Higher Education Executive Officers illustrates, public schools raise prices no matter what is going on with state and local subsidies: 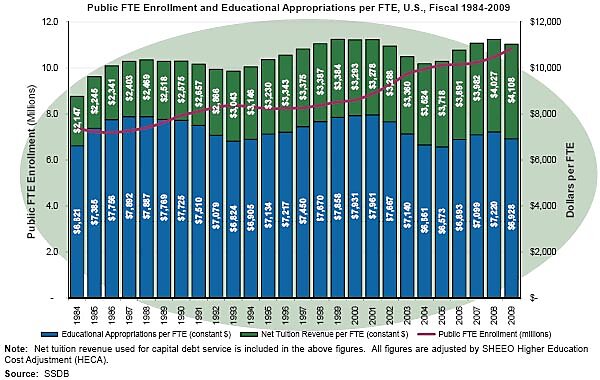 How can schools get away with this? Because students are able to cover the incessantly rising prices. And how can students do that? By using more and more money that comes from someone else!


The data scream this reality so loudly even passed‐​out undergrads could hear it. So why does it get so little attention? In part, no doubt, because many in the media refuse to even consider that there could be a causal connection between ballooning aid and skyrocketing prices. Even worse, the people controlling the aid see votes, votes, votes from playing education Warbucks. And if, say, the President of the United States can buy votes with student aid, why would he ever admit that his “generosity” mainly just lets higher education bleed taxpayers dry? The unfortunate answer is, he wouldn’t.