In a recent study, I explored how federal subsidies induce state and local governments to spend on wasteful projects. Case in point: a new “streetcar named quagmire” in St. Louis.

St. Louis business leaders looking to boost tourism and development spent years bringing the Loop Trolley to fruition, a $52 million streetcar project that runs for 2.2 miles between a historic park and an entertainment‐​and‐​business district on the edge of the city.

But it has been a bumpy ride, and now it may have reached a dead end.

The trolley, after just a year of offering limited service, is out of money. The nonprofit that operates the trolley is seeking $700,000 in local funds to continue, or else the service is set to close this month.

… The U.S. Transportation Department has awarded more than $1 billion to 18 streetcar projects across the country since 2009, a spokesman for the department said. The St. Louis project received a $25 million federal grant in 2010, part of a first wave of federal grants awarded in the wake of the financial crisis.

… Only two cars were ready at the outset, so the system could operate only part‐​time. A third car was needed to be held in reserve for full‐​time service to assure reliability.

That has held back cumulative ridership to 15,766 since last November and fare income to $32,500 through September this year—much lower than what had been projected under a full‐​time schedule. The Loop Trolley has also brought in about $689,320 through a 1% sales‐​tax on businesses along the route, since it launched service last year.

So after a year of operation, the $52 million project generated 15,766 rides, or just 43 rides per day. It garnered $32,500 in fares over 10 months. Let’s be optimistic and say the system generates $100,000 a year in fares if it keeps operating. Then it would still take more than 500 years to pay off the initial capital investment, let alone cover the operating costs.

If the Journal’s data is correct, this is idiocy. The problem is federal subsidies. Local governments are bamboozled into wasting money on silly projects when they get freebies from Washington. We all lose when governments misdirect our hard‐​earned dollars into activities where the costs far outweigh the benefits.

The solution is to end federal subsidies for transportation and other properly state and local activities. If local politicians have daydreams about re‐​creating the 1890s on their main streets, they should try to convince local taxpayers and commuters to pay the full costs. 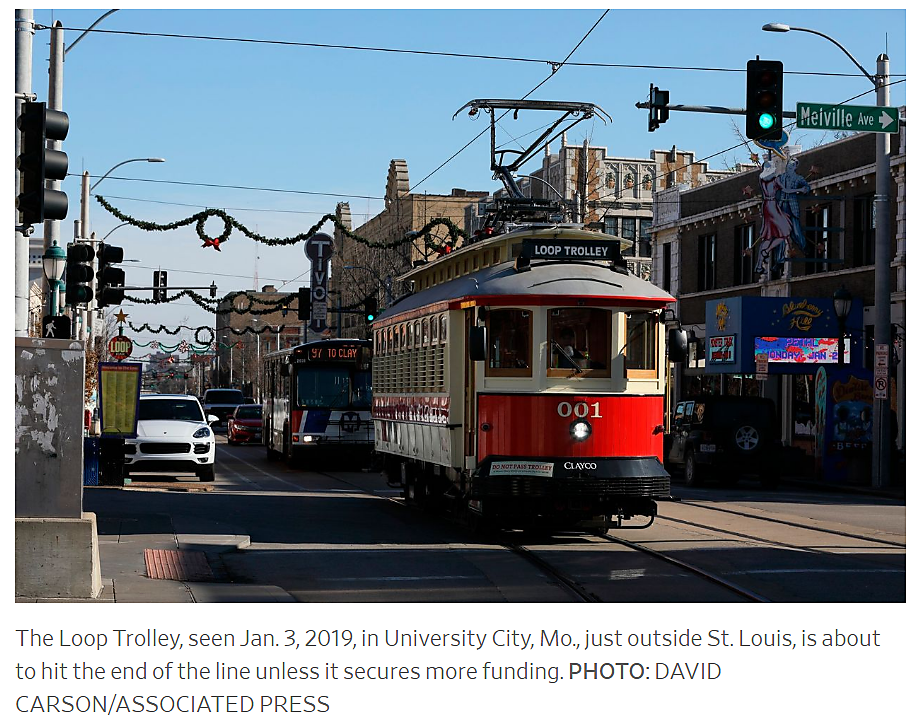 The article title in the hardcopy was “In St. Louis, Streetcar Named Quagmire.”