The National Center for Health Statistics reported last month that a record 63,600 deaths occurred in 2016 due to overdoses. Digging deeper into that number shows over 20,000 of those deaths were due to the powerful drug fentanyl, more than 15,000 were caused by heroin, and roughly 14,500 were caused by prescription opioids, although it has been known for years that, in most cases of prescription opioid deaths, the victims had multiple other potentiating drugs onboard. The rest of the deaths were due to methamphetamines, cocaine, benzodiazepines, and methadone. 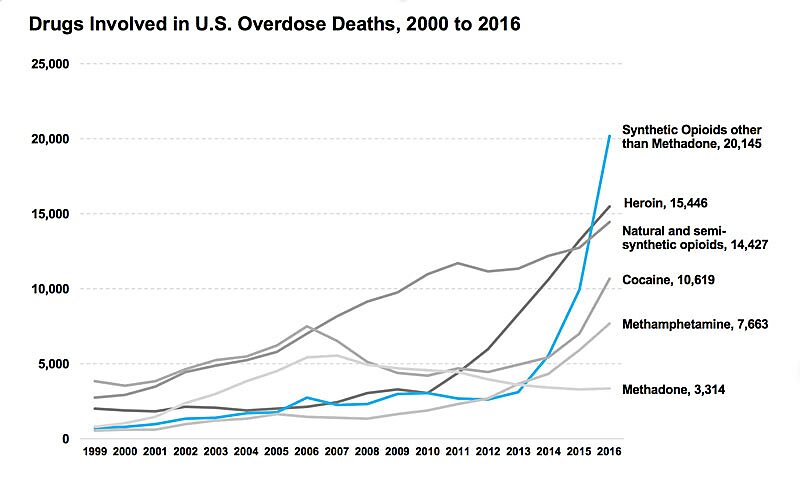 Drugs Involved in U.S. Overdose Deaths* — Among the more than 64,000 drug overdose deaths estimated in 2016, the sharpest increase occurred among deaths related to fentanyl and fentanyl analogs (synthetic opioids) with over 20,000 overdose deaths. Source: CDC WONDER


Fentanyl is not routinely prescribed in the outpatient setting, and when it is, it most commonly is in the form of a skin patch for slow, transdermal release, unsuitable for abuse or nonmedical use. The evidence shows it is being smuggled into the country, often by mail, in powdered form from factories in China and elsewhere, where it is used to fill counterfeit prescription opioid capsules or to lace heroin to enhance its potency.


Meanwhile, after increasing 13% annually from 1999–2009, the death rate increase from prescription opioids has remained steady at 3% per year since 2009.


For nearly a decade, policymakers have bought into the misguided narrative that the opioid overdose crisis is a result of careless doctors and greedy pharmaceutical companies getting patients hooked on prescription opioids and condemning them to the nightmarish world of drug addiction. As a result, the Drug Enforcement Administration has ordered decreases in prescription opioid production. There was a 25 % reduction in 2017 and a 20% reduction is ordered for 2018. States have set up monitoring programs that put doctors and patients under surveillance leading to a dramatic reduction in the prescription of opioids since 2010. In fact, high‐​dose prescribing fell 41% since 2010. The popular opioid OxyContin was replaced with an abuse‐​deterrent formulation in 2010 (that could not be crushed for snorting or dissolved for injecting), and, since then, several other such formulations have come online.


This focus on the supply and prescription of opioids makes many patients needlessly suffer in pain. Some, in desperation, turn to the illicit market to get relief, where they find heroin and heroin‐​laced fentanyl often cheaper and easier to get. Some resort to suicide.


Policymakers mistakenly focus on doctors treating their patients in pain. By intruding on the patient‐​doctor relationship they impede physician judgment and increase patient suffering. But another unintended consequence is that, by reducing the amount of prescription opioids that can be diverted to the illicit market, they have driven nonmedical users to heroin and fentanyl, which are cheaper and easier to obtain on the street than prescription opioids, and much more dangerous. 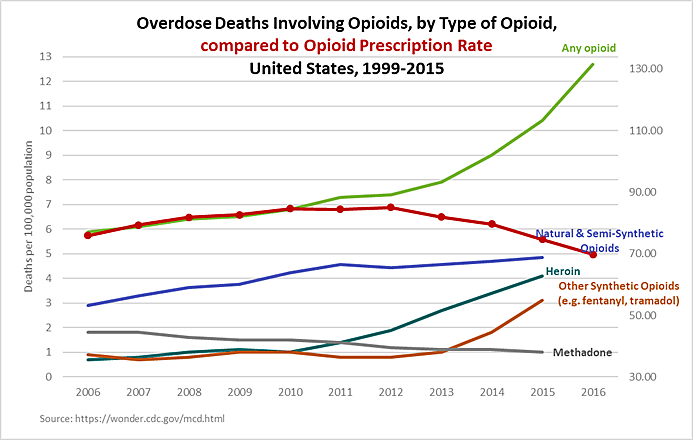 The overdose rate is not a product of doctors and patients abusing prescription opioids. It is a product of nonmedical users accessing the illicit market.


The problem will not get better—it will probably only get worse—as long as we continue to call this an “opioid crisis.” The title is too nonspecific. This is a crisis caused by drug prohibition—an unintended consequence of nonmedical drug users accessing the black market in drugs. Policymakers should stop harassing doctors and their patients and shift the focus to reforming overall drug policy. A good place to start would be to implement harm reduction measures, such as safe syringe programs, making Medication Assisted Treatments like methadone and suboxone more readily available, and making the opioid antidote naloxone available over‐​the‐​counter, so it can be easier for opioid users to obtain. Even better would be a sober reassessment of America’s longest war, the “War on Drugs.”


Renaming the problem a “heroin and fentanyl crisis” might be a way to trigger a refocus.