Yesterday, both the House and Senate passed the atrocious new Higher Education Act, a 1,158-page monstrosity packing 62 new programs, oodles of new spending, and a bureaucrats’ dream of new rules and regulations. I won’t go into all the gory details — I’d need hundreds of blogs just to do the file-sharing provisions justice — but one piece in particular really gets my goat.

One of the services the new HEA supposedly provides is that it will encourage states to keep up their share of higher education funding so that public colleges don’t have to make money — here comes every student group’s favorite phrase — “on the backs of students.” Thankfully, it’s a weak measure, threatening only to withhold a state’s allocation of a small, new grant program, but it’s the entire premise on which it’s built that’s infuriating. Today’s Wall Street Journal article on the bill provides a great example of the problem:

It is this very reduction of funding that state schools cite as an important factor pushing them to raise tuition. Total state appropriations for higher education have dropped to 11% for fiscal 2008, down from 15% 20 years ago, according to the National Conference of State Legislatures. Meanwhile, the average annual cost of attendance at a four-year public college, including tuition, fees and room and board, was $13,589 in 2007-08, 78% higher than it was two decades before, even after adjusting for inflation, according to the New York nonprofit College Board.

The argument here is that because the percentage of funding that schools get from their states has declined, the states aren’t keeping up their end of the funding bargain. But the real question should be whether states are staying consistent with their total per-pupil funding, which shows whether their commitment to higher ed has been steady. It has been: While state spending has fluctuated largely in accordance with the ups-and-downs of the economy, the 20-plus-year trend is one of overall consistent funding. This graph from the State Higher Education Executive Officers’ report State Higher Education Finance: FY 2007 makes this abundantly clear: 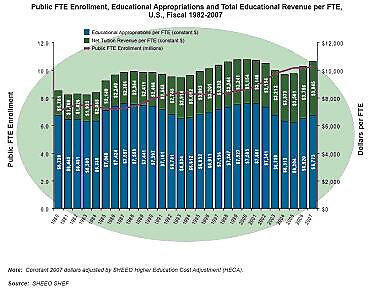 In real dollars, the 2007 public appropriation per full-time-equivalent student was $6,773, $34 higher than in 1980. Indeed, the highest public expenditure on the chart, $7,581, was very recent — 2001 — and while there have been lots of fluctuations, the trend is clear: states have been keeping up with their expenditures.

Something else, then, must be responsible for rampant tuition inflation — maybe, ever-increasing student aid, colleges and universities having more and more sources of income, or both — and state taxpayers shouldn’t be scapegoated by federal politicians. But then, what would be the excuse for passing garbage like the new Higher Education Act?