State of the Union Fact Check 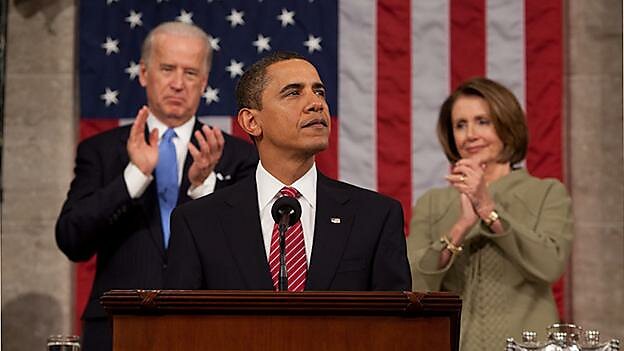 Cato experts put some of President Obama’s core State of the Union claims to the test. Here’s what they found.

The plan that has made all of this possible, from the tax cuts to the jobs, is the Recovery Act. That’s right — the Recovery Act, also known as the Stimulus Bill. Economists on the left and the right say that this bill has helped saved jobs and avert disaster.

Back in reality: At the outset of the economic downturn, Cato ran an ad in the nation’s largest newspapers in which more than 300 economists (Nobel laureates among them) signed a statement saying a massive government spending package was among the worst available options. Since then, Cato economists have published dozens of op‐​eds in major news outlets poking holes in big‐​government solutions to both the financial system crisis and the flagging economy.

Back in reality: Cato Director of Tax Policy Studies Chris Edwards: “When the president says that he has ‘cut taxes’ for 95 percent of Americans, he fails to note that more than 40 percent of Americans pay no federal incomes taxes and the administration has simply increased subsidy checks to this group. Obama’s refundable tax credits are unearned subsidies, not tax cuts.”


Visit Cato’s Tax Policy Page for much more on this.

Starting in 2011, we are prepared to freeze government spending for three years.

Back in reality: Edwards: “The president’s proposed spending freeze covers just 13 percent of the total federal budget, and indeed doesn’t limit the fastest growing components such as Medicare.


“A better idea is to cap growth in the entire federal budget including entitlement programs, which was essentially the idea behind the 1980s bipartisan Gramm‐​Rudman‐​Hollings law. The freeze also doesn’t cover the massive spending under the stimulus bill, most of which hasn’t occurred yet. Now that the economy is returning to growth, the president should both freeze spending and rescind the remainder of the planned stimulus.”


Plus, here’s why these promised freezes have never worked in the past and a chart illustrating the fallacy of Obama’s spending claims.

Because of the steps we took, there are about two million Americans working right now who would otherwise be unemployed. 200,000 work in construction and clean energy. 300,000 are teachers and other education workers. Tens of thousands are cops, firefighters, correctional officers, and first responders. And we are on track to add another one and a half million jobs to this total by the end of the year.

Back in reality: Cato Policy Analyst Tad Dehaven: “Actually, the U.S. economy has lost 2.7 million jobs since the stimulus passed and 3.4 million total since Obama was elected. How he attributes any jobs gains to the stimulus is the fuzziest of fuzzy math. ‘Nuff said.”